Overturned 18-wheeler shuts down I-10 East 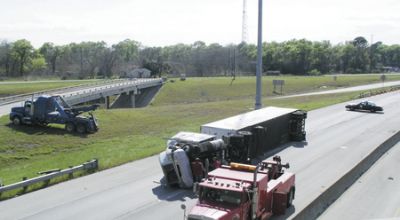 HIGHLANDS Officers were forced to shut down eastbound traffic on I-10 for about 4 hours last Tuesday, when an 18 wheel truck with a load of plastic flower pots overturned and blocked several lanes.
The accident occurred just east of Four Corners, where the on-ramp from Crosby Lynchburg Road engages the freeway. It happened at about 1 p.m.
There were no injuries in the wreck, according to State Trooper Orlando Jacobs. The truck driver, A. Hudson, from Laredo, said that he was cut off by another vehicle that continued on. He then collided with a white van and damaged it slightly. The 18 wheeler was a total loss. It was dragged off to the grassy berm by two heavy duty wreckers so that the lanes could be reopened about 5 p.m.
A crew from the CalArk trucking company offloaded the truck to another vehicle, finishing about 10 p.m. Traffic was backed up for hours, as far west as Beltway 8.