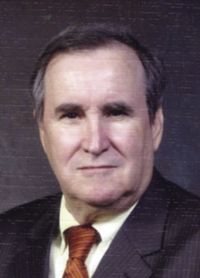 By BOBBY HORN JR.
CROSBYDr. Don Hendrix, who has given Crosby ISD the past 21 years of his life as well as the past 42 years as an educator was honored on Saturday night with a retirement celebration.
The affair, held at the high school commons, featured a three-part program followed by a coffee and cake reception.
Serving as master of ceremonies, superintendent-elect Mike Joseph narrated a multi-media presentation on the life and career of Hendrix. Going back to his days as a child on a sharecroppers farm and early years in Highlands to his graduation from Deer Park High, Joseph told how he moved from Coach Hendrix at Lyford High School to principal in Johnson City. During the presentation pictures of Hendrix with a mustache or wearing striped bell bottom slacks drew laughs from the audience.
Crosby ISD will never be the same (without Hendrix), Joseph said.
Following a standing ovation, a series of special presentations began.
The administration staff composed a humorous film called Searching for Dr. Hendrix, which concluded with a sentiment from Hendrixs assistance Veronica Ramos that was felt throughout the audience We will truly miss you.
Each campus followed with their own creative tribute to Hendrix.

Crosby Kindergarten presented a DVD that featured a Dr. Seuss-style book tribute. Barrett Primary followed with the Crosby ISD version of Jeopardy featuring Hendrix trivia.
Newport Elementary gave Hendrix a basket of memories which included a photo of how he looked when he was hired in 1986, blueprints from the high school and his final test, a certificate for golf at Newport County Club.
Drew Intermediates presentation featured students performing a traditional Mexican dance and faculty as The Drew Girls plus Rustina performing Hard to Say Goodbye.
Recognizing Hendrixs love for Zydeco music, students from Crosby Middle performed a Zydeco selection.
Students from Crosby High created a video tribute which focused on Hendrixs first day of retirement. The film concluded with Hendrix serving as an official Crosby ISD greeter, much like those at Wal-Mart. Hendrix was even given a red vest to wear, special retired superintendent parking sign and a key to the district.
Following an intermission the laughs continued with a roast and toast