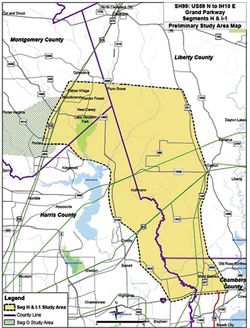 By BOBBY HORN JR.
EAST HARRIS COUNTYOfficials with the Grand Parkway Association say that completion of SH 99 segments in Harris, Chambers and Liberty County is expected to relieve congestion on existing highways while promoting economic development in the area.
Last week The Grand Parkway Association (GPA) held a scoping meeting in Mont Belvieu to discuss and gather input from residents concerning Segments H and I-1. Attending the meeting were representatives from the GPA and Texas Department of Transportation as well as design consultants.
Segments H and I-1 are planned to be a 4-lane limited access toll facility with a 400 right of way that will extend from IH 10 to SH 59 North, passing between FM 2100 and SH 146. The most popular design scenario has the road traveling about eight miles east of FM 2100 and passing through Eastgate before connecting near New Caney.

Purpose of SH 99
David Gornet, executive director of the GPA, said that there is a four-fold purpose to the highway project. The first is system linkage or improving mobility by linking major highways together at multiple points.
The second is to expand capacity. Gornet pointed to the evacuation prior to Hurricane Rita as a perfect example of the areas need to provide additional routes away from the coast. H and I-1, specifically, will take some of the pressure off FM 2100 and SH 90. The expanded capacity, he said, works hand in hand with the third purpose: to improve safety. With a high crash rate on the other highways, relieving the congestion will make for safer roadways.
The final purpose is economic development. Gornet said that studies show that when a new highway is open businesses tend to flock to the area. He pointed to the Katy area, which saw increased development after the completion of Segment D.
Timeline
The purpose of last weeks meeting was to solicit input from residents so designers can begin drawing proposed routes. This is the second meeting in Mont Belvieu. In 2006, the GPA held a scoping meeting where they first introduced the project.
With the input from last weeks meeting, as well as a third scoping meeting in 2008, the GAP will begin writing a Final Environmental Impact Study (FEIS). In 2009, the GPA will publish the FEIS, begin design work on the segments and preparation of the right of way.
Plans are to complete the right of way and award construction contracts for the roadway in 2011. With this schedule the roads will be open for use in November 2013.
To date, the GPA has completed only one section. Section H was began in 1983 and completed in August 1994. In 1991, the process began for Section I-2, which extends from SH 146 near the Fred Hartman Bridge to IH 10 in Chambers County. Completion of this segment is expected next month.