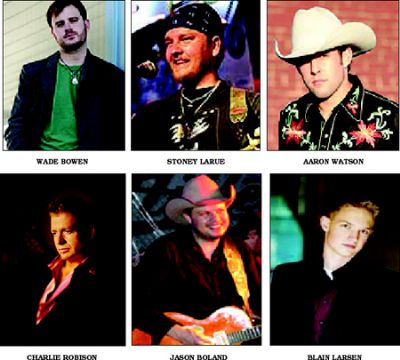 Wade Bowen will open the Thursday night Rodeo concert on June 7. Bowen attracted large audiences with God Bless This Town. It was number 4, then Live In New Braunfels won the 2004 Bluelight Live Album of the Year.
Bowen, who sings lead vocals and plays acoustic guitar, is backed up by Matt Miller and Gary Wooten on electric guitar. Brooks Robinson on drums and Casey Twist. The band is currently in the middle of their Hold My Beer and Watch This Tour. This tour takes them across Texas, Arkansas and Oklahoma, During the tour they will be part of a seven-day cruise concert with Crosby Fair and Rodeo alumnus Cross Canadian Ragweed.
This intensive touring schedule fits perfectly for an artist known for his ability to cross musical genres.
With musical influences that cite everyone from Aerosmith to Patty Griffin to Led Zeppelin and Paul Thorn, the result of Wade Bowens incessant touring is something akin to a smooth shot of roots rock with an alt-country back, served on ice with doses of traditional country and sensitive blues, but with a fiery edge, too.
A blend made all its own while not overwhelming the music pallet; Bowen is passionate about being a genre-crossing artist, learning from a variety of musical styles.
Stoney LaRue, 28, of Taft, Texas, with a whole lot of John Anderson like traits, is playing about 300 shows a year nationwide and in the Caribbean.
With a newly assembled band that includes Jeremy Bryant (drums), Jesse Fritz (bass), Rodney Pyeatt (guitar), and Steve Littleton (keys), Stoney LaRue is poised for hectic touring schedule to support their latest release The Red Dirt Album. In the week following Crosby, LaRue will find himself playing in Arkansas, Kentucky and Oklahoma before coming back to Texas for a performance in Bryan.

The recent recipient of the Gruene With Envy 2007 Artist of the Year award, LaRue counts an influence a wide variety of singers from Anderson to Willie Nelson, Ray Charles, The Grateful Dead and Kris Kristofferson.
Armed with golden ear musicianship, an amusing wit, and soulful magnetism, LaRues shows are infused with an uplifting quality, a cathartic barroom brand of spirituality, where venues are complimented for good bar feng shui, and where time and dimension can be traversed via emotive lyrics and melodic riffs.
A charismatic performer, LaRues flawless vocals can draw a crowd to a open mouth level of sonic mesmerization, and next have them singing Forever Young so loudly that you cant hear anything else.

Friday nights concert begins with Aaron Watson. Off the Record played top five in Texas in 2003. Capping that with Reckless playing top 5 of the Texas Music Chart for two months. The Amarillo native is now touring about 200 shows a year and has come to be called the Honky Tonk Kid.
Watson is now touring in support of his newest release San Angelo, which debuted at #60 on the Billboard chart and is up to #5 on the Texas Music Chart.
Aaron Watson looks too young and cheerful to know much about the honky tonk life, but one spin of San Angelo proves appearances can be deceiving.
Watson manages to find a comfortable middle ground between the radio-friendly polish of new country and the tougher sounds that continue to find favor in his home state of Texas, and while the party anthem Heyday Tonight may open the album, its harder-edged tunes about love and heartbreak like Blame It on Me, Haunted House, and the title cut that put the meat on this discs bones, wrote reviewer Mark Deming for the All Music Guide.
Jason Bowland and the Stragglers, 32, closes the Rodeo Friday, June 8.
Boland, backed by his band of stellar musicians: Roger Ray (pedal steel, lead/rhythm guitar), Brad Rice (drums/backing vocals), Grant Tracy (bass), and Noah Jeffries (banjo, mandolin, and guitar) have sold over 100,000 records since 1999.
The Bourbon Legend is Bolands first record with Sustain Records, an independent Texas-based record company distributed by Universal Music & Video Distribution. The first single, No One Left To Blame, carries with it heavy overtones of a music reminiscent of Waylon Jennings and Hank Williams Jr. while providing an edgy musical dose of a new generations varied influences. The majority of the songs on the record were influenced by acts such as the Marshall Tucker Band, Johnny Paycheck, Merle Haggard, among others.
Up and Gone recently hit number one on the Texas Music Chart.

Recently, Charlie Robison released Magnolia and voiced a depth of emotions from deep in the psyche. But there is the fun stuff too, on Love Means Never Having to Say Youre Hungry, one has to entertain the double entendre.
Born in Houston, Robison was raised in Bandera. A musician at heart, Robison even found his wife in the music industry. In 1999 he married Dixie Chick Emily Erwin.
Before Going solo, Robison was in the bands Chaparall, Millionaire Playboys, and Two Hoots and a Holler. At one point, Robison was on Warner Brothers, but apparently did not see eye to eye about his musical career there and left to release some albums on his own. Among his releases was a live disc also featuring brother Bruce and Jack Ingram that was put out by Sonys Lucky Dog label. He then went to Dualtone Records.
Robison was a judge on the first season of the TV singing competition Nashville Star.
Blaine Larsen, 20, grew up in a broken home only later in life to experience the joys of family when his mother remarried. The fresh faced kid features an adult voice, distinctive writing and musical accomplishment.
At age 13, inspired by George Straits music, Larsen bought a guitar with money earned from selling homemade birdhouses.
By his freshman year in high school, he was singing in assemblies and at school shows. His geometry teacher taught him chords and wrote a song with him, Keep It Country. Larsen also booked gigs in Buckley at sporting events, weddings and in civic clubs.
However, one of Larsens classmates got in touch with her distant relative, Rory Lee Feek, a successful songwriter in Nashville. She encouraged him to listen to Larsens music. Feek had never even met Larsens classmate, but he dropped by the studio to say hello. After returning from Washington, Larsen sent him a finished CD.
After hearing it, Feek and songwriter Tim Johnson flew the 15-year-old singer back to Nashville for a legitimate recording session. They started a label and released a single titled In My High School, which received some airplay in Seattle.
An employee of BMG in Seattle sent a note to Joe Galante, head of the BMG labels in Nashville, suggesting that he check out Larsens Web site. Galante quickly auditioned him and signed him. At the end of 2004, the label released the single How Do You Get That Lonely, about teenage suicide. His major label debut, Off to Join the World, followed in early 2005. A year later, he issued Rockin You Tonight and went on tour with Gretchen Wilson.
The Crosby Fair & Rodeo Board seems to bring in better acts each year, and seeing them here has proven to be a value because the performers have a tendency to go big after playing here.