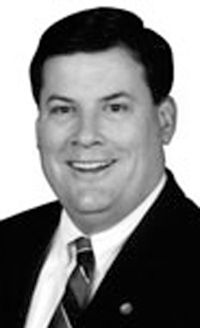 AUSTIN — Senator Tommy Williams has been named one of Texas Monthly’s “Ten Best” Texas Legislators of the 80th session. The prestigious award is bestowed to honor those who have made a mark during the legislative session.
Texas Monthly applauded Williams for his work on the Transportation and Homeland Security committee, particularly for his leadership on the Omnibus Transportation Bill.
“Williams is a closer. When the pressure is on and the opposing team is sending up its best batters, you need someone to throw the perfect pitch. Williams was that guy in the Senate this session. When Perry vetoed an attempt to rein in TxDOT, Williams kept the reform efforts alive by expanding one of his local bills. He saved Harris County highway projects from becoming a casualty of friendly fire in the toll road moratorium battle by prohibiting TxDOT from committing highway robbery in selling right-of-way to local road-building authorities at elevated prices.”
Texas Monthly further praised Williams for his effectiveness in defeating a fiscally irresponsible proposal.
“We’ve made great strides in protecting our border, providing transportation infrastructure, and ensuring property tax relief this session. I am honored that Texas Monthly has chosen me one of their
‘Ten Best’ Legislators for my work on these and other important issues,” said Williams.
Williams represents Senate District 4 covering all or portions of Jefferson, Orange, Chambers, Liberty, Harris and Montgomery Counties.
Williams serves as Vice Chairman of the State Affairs Committee and as a member of the Finance, Transportation, Education and the Sub-Committee on Higher Education in the Texas Senate.