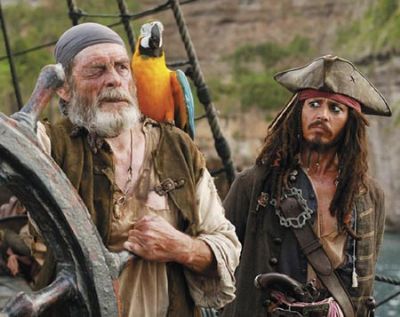 Pirates of the Caribbean: At Worlds End
Running time: 168 minutes
MPAA rating: PG-13
The third (and hopefully final) installment of the Pirates of the Caribbean series suffers from the misapprehension that more is better.
Sometimes it isnt. And in the case of At Worlds End, more is too much: Too much plot, too much exposition, too much Keira Knightly and Orlando Bloom (Zzzzzzz), and at nearly three hours in length, too much movie.
What Pirates doesnt have enough of is Jack Sparrow. Lets be real here: Johnny Depp carried the first movie. It was his portrayal of the swishy, swashbuckling savant Jack Sparrow that made the first movie the hit that it was. It wasnt the love story. It wasnt the special effects. It was Depp. Depp. Depp. … Period.

In this film, there arent enough scenes of Depp doing what he does best, chewing up the scenery as the scheming, bumbling cad we adored from the first film.
Instead, we get a convoluted plot concerning the alliance between the East India Company and Davy Jones and the search for nine pieces of eight (yes, you read that right) and a pirate congress and plots within plots and people sitting around yelling Arrrr! and talking about what theyre supposed to be doing  instead of just DOING IT.
But no. For a three-hour pirate movie, its a crime that we have to wait nearly two hours before we see a monkey get shoved into a cannon. A pirate movie should have PIRATE STUFF in it. Not a bunch of talking. And certainly no boring love story  especially when the two people in love are portrayed by two of the most dull, emotionless actors on the planet.
Keira Knightly, whos looking more and more like an anorexic catfish every day, thinks that projecting emotion is simply a matter of sucking in ones cheeks. The more she sucks, the more emotion shes supposedly emoting.
Orlando Bloom reads every line as if hed just had a chemical lobotomy performed. Needless to say, SuckFace & Durrrrrr pretty much ruined most of the movie for me.
I cant recommend At Worlds End. It had the potential to be a Great White Shark, but instead, its just a blowfish.