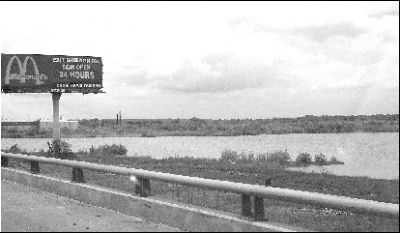 HIGHLANDS Speaking at last weeks Rotary luncheon, Congressman Gene Green recalled old friends from Highlands, such as Mark Warren, now editor of a national magazine, and others. He spoke about how his district had been redrawn several times, and now stretches from Baytown to Greenspoint in a contorted shape. But his interest extends to citizens in all these areas, and by default includes concerns about the Highlands area.
During his talk, Greene presented copies of letters that he and Congressman Ted Poe have sent to the federal Environmental Protection Agency, and Texas Governor Rick Perry, asking that a site in the San Jacinto River, close to the I-10 bridge, be placed on a Superfund National Priorities list, for clean-up action.
In the letter, they say that an industrial waste pit was operated by McGinnes Industrial Maintenance Corporation during the 1960s and 1970s. At that time the pit was on dry land, but over the years the pit has submerged. The site was rediscovered in 2005 after high levels of dioxin were detected in fish from the San Jacinto River. The Texas Commission on Environmental Quality (TCEQ) believes that the waste site is now releasing toxic levels of dioxin into the San Jacinto River, which flows into the Houston Ship Channel and Upper Galveston Bay.

They say that a preliminary report has determined that the pollution would qualify this site for cleanup. On behalf of constituents in the 29th and 2nd Congressional districts, Green and Poe asked for this site to be declared a Superfund so that the cleanup process could begin.
Green has been a member of Congress since 1993, after serving twenty years in the Texas House of Representatives and the Texas Senate. Joking, he said that after all that government service, he probably couldnt hold a real job. This is in spite of the fact that he worked previously in the printing and publishing business, and received a degree in law from the University of Houston.
Although his district has been redrawn several times, and is considered an Hispanic district, nevertheless he consistently is reelected by a large majority, signifying the satisfaction his constituents have with his performance.
He is on the Energy & Commerce committee, because of his districts distinction as the largest prochemical complex in the U.S. He also serves on the Ethics Committee and the subcommittee on Healthcare.
His special interests have include Houston Head Start, the Port of Houston, and Intercontinental Airport. He is well known for sponsoring an annual Immunization Day and a Citizenship Day.
In this area, he has helped get funds for the restoration of the Battleship Texas, the completion of Highway US90, and in downtown Houston the extension of the METRO light rail. He credits Poe and others with joint effort on these issues.
He views important issues not yet resolved as Energy, the Environment, and Immigration reform. Also, Healthcare is in need of reform, as Harris County has one of the highest uninsured rates in the nation.