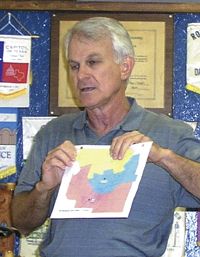 By BOBBY HORN JR.
BAYTOWNIn April over 100 citizens jammed the Goose Creek CISD Board Room to let trustees know what they thought about two high school zoning plans that were being considered.
The plans, called X and Z were part of a proposal to create socio-economic equality among the soon-to-be three high schools.
Among those speaking against the plans were Highlands Lynchburg Chamber of Commerce President Jessica Woods and the Rev. Tim Edwards from First Baptist Church of Highlands.
Under those plans, Highlands students would continue to attend Sterling, which is 10 miles from Highlands rather than the new high school, which is four miles away.
Highlands to attend new school
It seems that Highlands concerns have been heard.
Two plans now being considered by the board, Option 1 (formerly AB6-4.1) and Option 2 (formerly AB5-2) both call for Highlands to attend the new third high school which will open in Fall 2008.
Before making their final decision, the board would like to hold two more public forums. When to hold them, however, is the sticking point.

During this weeks Board of Trustees meeting Deputy Superintendent Toby York said that it would not be possible to hold the meetings before school resumes on Aug. 27. Between now and that date, he said, the districts print shop is too busy preparing documents for the start of school to have time to make the required documents for a public forum.
Forum dates likely in September
Among the dates considered for possible forums were Sept. 11 and 13 and Sept. 25 and 27. The board also discussed a compromise of Sept. 20 and 25. The forums would be held one night at Lee High School and another night at Sterling High.
The board, however, did not set a firm date for the forums.
These forums are important for the board to get more public input before they make their final decision that is tentatively set for Oct. 8. The adopted attendance zones will figure prominently in the districts projects attendance figures for 2008. The University Interscholastic League has requested these figures by mid-October so they can began preparing for state-wide district realignment which takes place every two years.
Name sought for new high school
Goose Creek is seeking community input for the name of the districts third high school. The school, located at North Main Street and Wallisville Road, is scheduled to open at the start of the 2008-09 school year.
Citizens may send their suggestions for the school name to the GCCISD Superintendents Office at P.O. Box 30, Baytown, TX 77522.  According to GCCISD Board Policy, the nomination should include three paragraphs containing biographical data about the nominee, the significant contribution of the nominee, and a statement of why the school should be named after that person. It is also usual for the person NOT to be living.
Written nominations also may be faxed to 281-420-4815, e-mailed to ngarcia@gccisd.net, or brought to the GCCISD Administration Building, 4544 Interstate 10 East.
The GCCISD Board of Trustees will hold a public forum on Aug. 16 for community members who would like to present their suggestions for the name of the new high school.
During the forum, the Board will hear nominations from citizens as well as review written nominations.  Presentations will be limited to three minutes per person, with no more than five individuals speaking per nomination.
It is a chance to be heard before the decision is reached.