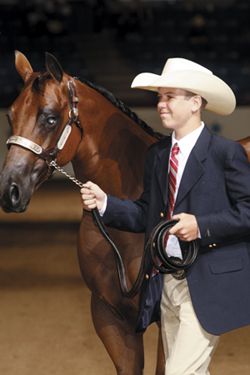 By LEWIS SPEARMAN
FORT WORTH– Garrett Vaughan of Crosby, and his American Quarter Horse Coolestshowgirlintown captured the world champion yearling mare title at the Ford American Quarter Horse Youth Association World Championship Show in Fort Worth on Saturday.
Vaughan and his 1-year-old bay mare showed against 25 entries to win the title and a prize package that included a Montana Silversmiths silver buckle, Cripple Creek leather jacket and products from Tex Tan and Professionals Choice.
The Lee Sterling High freshman, 15 year old says Ive been halter showing since I was about 9.
The American Quarter Horse Youth Association World Championship Show is the worlds largest, single-breed youth world championship show. This is the pinnacle for youth around the world who must qualify for the event by earning a predetermined number of points to earn the right to compete in each of the 33 classes representing halter, English, and western disciplines.
A local trainer, Terry Nutt, introduced the family to the events and a fine horse. In 2003 Garrett first went to the H.U.H.Y.A. events and placed third in World in halter. It took several events to qualify Coolestshowgirlintown to attend the championship.
Nearly 2,000 entries from the United States, Canada, Brazil, Italy and Venezuela competed at this years event.
The event is a beauty show for horses with requirements of poise, body development and posture with expert handling by the equistrian. The confirmation totality; coat, shape of the head, and developed shape of the body of the horse makes up the basis of the horse. It is to determine the best representation of an American Quarter Horse.
Garrett is training as cornerback and receiver for the Baytown Sterling football team. He is the son of Gary and Lisa Vaughan of Crosby.
Garrett is involved in Crosby 4-H, has won Reserved Grand Champion at the Houston Livestock Show and Rodeo.
Garrett says his next horsemanship plans are to Go back next year and win again. although Coolestshowgirlintown has now been sold as a result of the Championship.