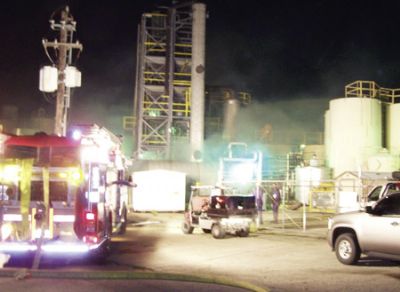 By LEWIS SPEARMAN
CROSBY  Heroics, planning and expertise made a lofty spectacle for few observers last Friday, August 3 as Crosby Volunteer Fire Dept. commanded the snuffing of flames at KMCO L.P. on Ramsey Rd. with support from Highlands V.F.D. and numerous other local fire and ambulance agencies.
KMCO L.P. states that Beginning at approximately 7:30 p.m., KMCO experienced an upset when a distillation column was taken down for a turnaround. The manways had been removed for cool down and preparation for entry and clean out of the unit. That unit had salt residue in the bottom of it which ignited. 
KMCOs ERT (Emergency Response Team) went into action, contained the fire along with Crosby Volunteer Fire Dept. and their backup, mutual aide, eventually extinguished the fire using foam and water. The process took approximately five hours from the time it started until the time the column was closed up and there was no chance for re-ignition.

The Harris County HAZMAT mobile unit as well as Harris County Pollution Control was also present during the event. Lots of steam could be seen as a result of the water being used as a source of cooling and extinguishing agent. There appears to be no issues with either agency on site.
Vacuum trucks were dispatched as soon as it was determined that there was run off water outside the facility. The run off water was contained and removed into the following day.
KMCO L.P. representative Venita Smith notes, There was no danger to the public at any time. There were no lost time injuries to any personnel or fire fighters.
We would like to say Thank You to all agencies involved for their rapid response and the cohesive team work that took place in resolving this upset.
Radio transmissions stated that two people refused transport to the hospital against medical advice while other observers stated that injuries were minor due to the caution exercised by crews.
Crosby Assistant Chief Black was in command of the scene for most of the five hours, Black never wavered in a firm and calm leadership, judging from radio transmissions.
At one important step in containment, foam stopped up one of the lines. Within minutes the crews had replaced the line and began anew with suppression efforts.
Crews worked from elevated gangways in fire suits inside steam from the unit but maintained a steady vigil until about 9:00 p.m.
Law Enforcement on the scene at about midnight stated that most of the fire had been cooled down but the remaining efforts were to secure underground structures.