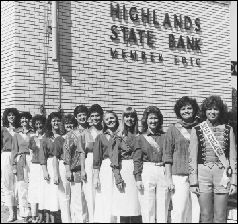 HIGHLANDS Rotarians heard from Mike Nebgen this week at their luncheon, on plans for the October 6th Jamboree.
Nebgen outlined sponsorship opportunities, and mentioned that the Jamboree was the main fund raiser for the Highlands Chamber of Commerce, and deserved the support of the business community. He said that companies could support the Jamboree at any level they wished, but suggested either $100, $250, $500, or $1000.
Sponsors will get their names on tee-shirts, programs, and publicity throughout the event. Interested organizations can call the Chamber at 281-426-7227 or Jamboree Chairperson Margie Elliott at 281-843-2947.
Also speaking at Rotary was Highlands Horizons president Delene Cotten, who noted that the Miss Highlands pageants, a traditional part of the Jamboree sponsored by the Horizons club, is celebrating its 50th Anniversary this year, and expects to have all 50 Miss Highlands present for the festivities, and to ride in the parade on Jamboree Saturday. She noted that the Jr. Miss Highlands pageant will take place at 2 p.m. in the Highlands Junior School auditorium, and the Miss Highlands pageant will be held at 7 p.m. in the same auditorium.
Nebgen said that the events in the Jamboree will follow tradition, with a Fun Run and Bike Ride early on Saturday, the parade on Main Street starting at 10 a.m., and other events following at the Highlands Elementary. These will include a Live and Silent Auction, a Raffle, and live entertainment from 11 a.m. to 2 p.m. Further details will follow in the Star-Courier.