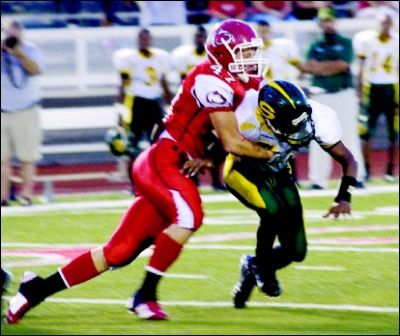 By BOBBY HORN JR.
CROSBY– Durran Starks made sure his final homecoming game at crosby was a special one as he contributed six touchdowns in Crosbys 52-20 district win over Smiley.
After falling behind 7-0 in the first, Starks pulled his team within one points with a 16-yard pass to Zeph George. Smiley returned the favor three and a half minutes later.
The Cougars got the touchdown back later in the quarter when Chris Murphy caught a 14-yard pass from Starks.
A missed extra point earlier in the quarter allowed Smiley to enter the second quarter with a one-point lead. That was all Crosby would give them as the Cougars responded with six concectutive touchdowns over the next two quarters to build up a 52-14 lead.
Starks got the scoring going four and half minutes into the second with a 17-yard pass to Xavier Frank.
Showing they could run the ball as well as throw, Crosby turned to Chance Casey who scored on a 19-yard run.

With 1:21 left in the first half and the Cougars lined up on the Smiley 5-yard line Toris Doze took the handoff and scored. This gave Crosby a 32-14 halftime lead.
The Cougars werent done yet. Three minutes into the second half Starks threw a 24-yarder to George for a touchdown.
Showing his mobility Starks then picked up a rushing touchdown midway through the quarter.
The final Cougar touchdown of the night came with 1:47 left in the third when Starks completed a pass to Frank. Frank was off to the races, carrying the ball 74 yards for a touchdown.
While the Cougar offense was picking apart Smileys defense, the Crosby D was able to keep their opponents quiet for nearly three quarters of play.
Crosby forced three turnovers in the game, two coming on fumbles. While allowing 305 yards rushing, Crosbys pass defense shut down Smiley. Smiley used two quarterbacks who completed a combined three of eight passes.
The Cougars will face a tougher test this week when they travel to Barbers Hill. Barbers Hill is coming off a 49-18 win over Forest Brook.
With both teams posting a 3-1, 1-0 record the teams will try to establish themselves as a playoff contender.
They will also both keep an eye on the game in Huffman, where the districts only unbeaten team Galena Park faces Huffman.