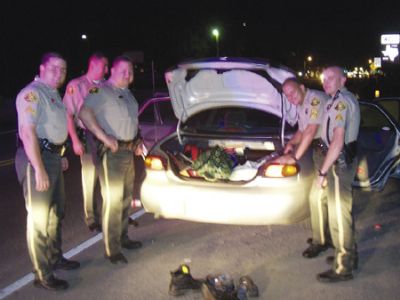 By LEWIS SPEARMAN
CROSBY  Precinct 3 Constable Deputies made their largest quantity of methamphetamine arrest in the history of this area at about 3:00 a.m. Friday, October 12.
A traffic stop of a weaving car at about 2:40 a.m. by Deputy Jose Quintanilla would set in motion the interdiction of about 10 pounds of liquid methamphetamine, small packets of the powder and equipment to manufacture more.
The night shift deputy observed the driver to fail to drive in a single lane. He almost ran off the roadway.
According to Sgt. Jasen Rabalais, the suspect car containing the controlled substance pulled into a Barrett Station driveway  apparently when its driver saw a Precinct 3 patrol unit coming from the South behind it.
Quintanilla guessed that the suspect was hoping the deputy would just pass by and not make a stop. So, the deputy proceeded North  passing the car. Then he hid his patrol unit, awaiting the car to pass again. This way, he could watch what was happening as the vehicle passed him and he would be behind it before the other vehicle was aware of his presence. After the car pulled out from the driveway, it began to vier from one side of the roadway to the other, Sgt. Rabalais indicates.

The erratic driving was enough cause for the deputy to put on his overhead lights and the vehicle pulled over.
Quintanilla cautiously approched the car and looked inside. Inside the car, the deputy saw ont only a male driver and a female passenger but also syringe needles and what appeared as powder in a small packet of sealable baggy not completely under the passengers seat.
He called for back up and back up arrived in about two minutes. Sergeant Rabalais, Deputies Jeremy McCaffrey, C. Dobbins, J. Camudio all showed up to help out. Deputy Bearden arrived last, having just come from stopping a fight in Channelview and processing an arrest there.
Deputy Quintanilla detained the people in the automobile, removed them from the vehicle and began to question them. He observed that they seemed to be under the influence of something.
When Sergeant Rabalais asked the woman about the small quantity of powder, she at first said she knew nothing about it then she said. Okay, lets talk about the Meth.
That statement was a clue and not the only one. Other deputies suspicious items in the care.
As Sgt. Rabalais began to ask questions of the male driver, the man fell to the roadside and began to gyrate.
ESD#5 paramedics were called to the scene. A female paramedic said to the man apparently attempting to behave like he was having a seizure, It isnt working.
The man then ceased to gyrate.
The driver had a pocket knife, ( which is classified as a weapon) and personal items. The contents of the womans purse were several more packets of powder, a pipe and a cell phone.
The small packet of powder turned out to be methamphetamine and several packets of similar powder were found inside the womans purse.
Inside the packed trunk of the car were a VCR, various items stuffed inside a bag, another bag with what the F.B.I would identify as water bottles filled with about 900 grams of liquid meth, and devises used in the manufacture of methamphetamine.

With the radio announcement of a mobile meth lab being discovered, agents of the Drug Enforcement Agency, Harris County Organized Crime, Texas Department of Safetyand F.B. I were on the way to help the deputies deal with the potentially volitile and highly dangerous substance. An agent from the Federal.Bureau of Investigation showed up first to identify and process the evidence.
Rumors spread of another arrest for the manufacture of methamphetamine by federal agents later at a location where a woman was observed to be cooking up three vats of the drug. More arrests seem likely to follow.