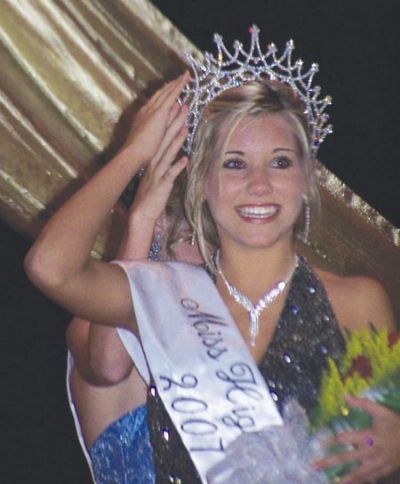 By BOBBY HORN JR.
HIGHLANDSDespite an early morning rainstorm that cancelled the parade, the 51st Annual Highlands Jamboree turned out to be a success with thousands of people coming out to Highlands Elementary on Saturday afternoon for the festivities.
There was good fun for all Saturday, with games and prizes for the youngsters, live entertainment, historical displays and food, food, food.
Inside the school, visitors were able to meet local business representatives and browse through the silent auction area.
Junior Miss Highlands
Just down the street friends and family battled limited parking areas and large mud holes to attend the 15th Annual Junior Miss Highlands and 50th Annual Miss Highlands Pageants. The Highlands Horizons community service organization hosts the pageants each year.
With the new Highlands Junior School opening in the Fall of 2008, this would be the last pageant in the old auditorium.
Held in the afternoon, the Junior Miss Pageant began with the opening number choreographed by Amanda Twiggs. The contestants performed a dance routine to Elvis Presleys All Shook Up.
Contestants are judged in three areas: sportswear presentation, party dress presentation and interview. There is also an optional talent competition.

While sportswear and party dress involve poise and modeling the interview portion is the one which brings out the contestants ability to think on their feet. The girls have no prior knowledge of the question to be asked and as one is being asked, the others are segregated so that they cannot hear the answer. This years question, which dealt with what age a girl should be allowed to date and why, brought a variety of answers ranging from 13 to 16, with most saying that maturity was a deciding factor.
When the winners were announced four special awards were first given. Madison Gibson won both the Talent Award as well as High Ticket Sales. This years Junior Miss Congeniality, Lexi Edwards, also won the Miss Photogenic Award.
In the final judges tally, second runner up went to Faith Drews. Gibson won first runner up.
Tears began to flow when Emilee Traylor, the first runner-up in the 2006 pageant, was named 2007 Junior Miss Highlands.
Miss Highlands
The final event of Jamboree was the Miss Highlands Pageant. Recalling the last half -century of pageants, the girls opened the program with a routine to a montage of songs from each decade. The choreographer was Jamie Lumpkin.
Began as the Jamboree Queen Pageant in 1956, the pageant has been held every year except 1957. To honor those who have worn the crown, the pageant directors showed a video retrospective with photos from each years pageant.
The competition for the Miss Highlands is the same categories as the Junior Miss with one exception. The older girls are given a more age-appropriate question. This years question posed the scenario that the girl would be featured on the front page of the New York Times in 10 years. What, they were asked, would the story be about?
This years senior talent winner was Haylee Bogie. Jennifer Valentine was voted Miss Congeniality. Each year the pageant honors one contestant for her community service with the Jennie Robbins Service Award. This years recipient was Courtney Briscoe. She was a co-recipient last year.
Kayla Neathery won both the Photogenic award and High Ticket Sales.
This years second runner up was Crystal Bradford. Candace Smith won first runner up.
The crowd erupted in cheer as Kayla Neathery won the 2007 Miss Highlands title.