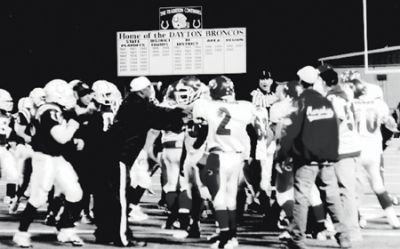 By BOBBY HORN JR.
CROSBYGoing into Fridays game with the New Caney Eagles (2-8, 2-5) the Crosby Cougars (8-2, 6-1) already had a playoff berth secured but they needed one more win and some help from Barbers Hill to win the district 21-4A Championship.
The Cougars were successful on both counts; beating New Caney 33-18 while in Mont Belvieu Barbers Hill defeated Galena Park in a come-from-behind win 35-30. Although the Cougars technically have the same record at Smiley at 6-1 in district play, Crosby fans can brag that they dealt Smiley that single loss.
Chance Casey gave the Cougars their first points of the night three and half minutes into the game on a five-yard touchdown run. A missed extra point gave Crosby a 6-0 lead. Casey ended the game with 87 yards on 12 carries. These yards pushed him over the 1,000-yard mark for the season.

About a minute and a half later New Caney took their only lead on the night when Chad Jackson scored on a 57-yard run. The Eagles kicked the extra point for a 7-6 lead.
The Cougars struck back quickly.
Toris Doze fielded the ensuing kickoff on the 20-yard line and brought it back the length of the field for an 80-yard return. A second attempt at the PAT failed leaving the score 12-7.
The Cougar defense cracked down on New Caney forcing them into a fourth down situation late in the first quarter. Rather than attempt the conversion and risk bad field position the Eagles chose to go with a 30-yard field goal.
Durran Starks led his team back down the field in the Crosby version of the two-minute drill. The drive ended with Starks 22-yard touchdown pass to Preston Cantrell. Starks completed 15 of 23 passes for 248 yards.
Crosby increased their lead to 26-10 in the second quarter on a 13-yard run by Doze.
In the third quarter Starks came through again with a six-yard pass to Kyle Miller to give the Cougars a 33-10 lead.
New Caney would score once more in the game. In the fourth quarter Crosby made one of its few mistakes in the game when they lost control of the ball. Chad Jackson picked up the fumble for New Caney and took it back 64 yards for a touchdown.
With the regular season over, the Cougars turn their attention to the playoff.
Crosby will face Dayton in the Bi-District round. Dayton is coming off a 40-7 win over Port Neches Groves.
The two teams are familiar with each over having faced often in either district play or in the playoffs.
They are a fast, physical and well coached team, said Coach Head Coach Kevin Flanigan,  I know there are going to bring everything they have.
The past couple of years have seen a heated rivalry between the schools with Dayton getting the better of the exchange on the field.
In 2005 the two teams met in the final game of the season with the then-District 29-4A title on the line. Dayton beat Crosby 21-3 to win the championship, knocking the Cougars into third place.
Last year the Cougars and Broncos met in Dayton for Bi-District. The heated emotions of the game came to a head in the third quarter with a bench-clearing brawl that had to be broken up by police. Dayton knocked the Cougars out of the playoffs with a 35-0 win.
Flanigan said that his team is not focusing on the rivalry. For us its just another game. We played really hard this week and I expect us to play Dayton just as hard.
Injuries are a bane to a football team. Galena Park, the preseason favorite for the 22-4A title saw their perfect season come to an end two weeks ago as they lost three starters to injuries. No such problem for Crosby. Everybodys health and were ready to play, Flanigan said.
The Bi-District game will be played Friday at Cougar Stadium in Crosby. Game time is 7:30 p.m.