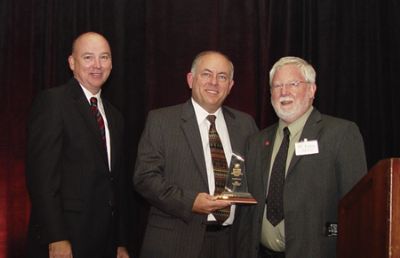 By GILBERT HOFFMAN
North Harris Montgomery Community College District annually awards five local businesses, one in each of its college districts, the prestigious Small Business of the Year at an awards banquet.
In the North Harris College service area, the award was made to publisher Gilbert Hoffman and the Northeast News. This is one of four newspapers published by Grafikpress Newspapers, including the Highlands Star-Crosby Courier and Barbers Hill-Dayton Press..
The award is based on community service and exemplary business practices, job growth, and recommendations from community leaders.
A gala evening attended by over 350 persons at the Crowne Plaza Hotel Greenspoint was the setting for the 21st annual awards ceremony, sponsored by the Small Business Development Council of North Harris Montgomery Community College District.
The award winners were:
North Harris College, NORTHEAST NEWS, Gilbert Hoffman;
Cy-Fair College District, BOULLION GRAPHICS, Jill & Pat Boullion;
Kingwood College, LETS MECHANICAL, Leonard Rogers;
Montgomery College, HOMEWATCH CAREGIVERS, Beverly Brinson; and
Tomball College, SERVPRO OF SPRING/TOMBALL, Kathleen & Anthony Scott.
The evening was emceed by Bennie Lambert, VP of Student Development at North Harris College. Also speaking was Chancellor Dr. Richard Carpenter, who took the occasion to announce the new name for NHMCCD, which is Lone Star College District.
The Small Business Development Center is under the direction of Sal Mira, who spoke about the logistics of the awards and the banquet, and thanked those who helped.

This included the title sponsor, Capital One, and other sponsors including Amegy Bank, UHY Advisors, Harry Bucalo, CenterPoint Energy, Greater Conroe Economic DC, Greespoint District, Joiner Partnership, Kingwood College, Newtek Business Services, Schubot Law Firm, Schulte Building Systems, Sterling Bank, and Resource Protection Mgmt.
Music for the evening was presented by the Ace Jazz Orchestra.
Mira explained that the process to choose the finalists had started with nominations for 180 firms, which had been narrowed to 15 businesses.
These included Boullion Graphics, Perry Pools & Spas, Schubot Law Firm, Frost Construction Company, Lets Mechanical, The Filter Man Ltd., Biogime International, Daniel Office Products, Homewatch CareGivers, Magoos PrintShop, NorthEast News, Vest Rea & Associates, Chaparral Management Company, Schulte Building Systems, and SERVPRO of Spring/Tomball.
These firms had been judged by a committee of the SMDC advisory council, and judged on several submissions and letters of recommendation.
Each of the 15 finalists participated in a video interview that was presented during the evenings ceremony. They had one minute to talk about their company and the reasons for its success, and the importance of the award to their business.
Also, after the awards were announced in each category, the winner was given an opportunity to address the audience with additional thoughts.
Other speakers during the evening included Jerry Lowry of the Greenspoint district, Paul Davidson regional president of Capital One, and Ray Laughter, Vice Chancellor of the NHMCCD.
The 15 finalists also had booths set up in the prefunction area to display details about their businesses.