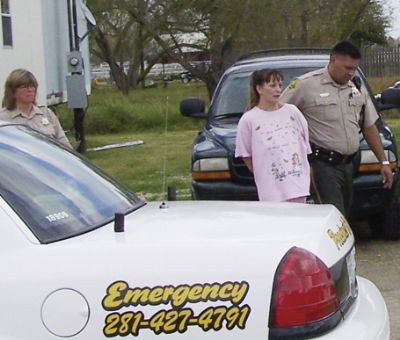 By LEWIS SPEARMAN
CROSBY  An alert real estate agent and equally diligent Precinct 3 Deputies netted a burglary confession, at least 310 grams of methamphetamine and a small lab for the manufacture of the controlled substance on Saturday, Dec. 8.
Just about one year ago, Century 21 Life Changers was broken into and this year there was another break-in. The integrity of personal information and all keys stayed out of perpetrator hands.
One alleged and later confessed burglar was still at the scene when Roger Nelson went to work that morning.
Nelson saw a Dodge Dakota leaving the parking lot of the adjacent business and noticed that the office had been burglarized. Most of the office had been stripped, wires to information systems and telephone lines had been cut.
Officers say the door had been pried and kicked open.
He decided to follow that Dakota, and call the boss, Broker Don Cox. Around Newport Subdivision it went in what Nelson described as an inappropriate pattern.
I think I did what anyone would have done. The vehicle had boxes on top of the cabin so I decided I would follow it and get the license number from three or four car lengths behind. I just wish I had called 911 instead first. said Nelson.

At one point at North Diamondhead Rd. on Port O Call, the driver of the Dakota, a woman, got out went back to his car and stated to Nelson, Are you following me? Because my mama told me to drive around in circles if I think someone is following me.
Not knowing if the suspect was armed, Nelson wisely denied he was and as she turned left on N. Diamondhead he turned right and went back to the office. There Mr. Cox and Precinct 3 Deputies awaited. He had made the right move.
The plates came back to deputies as belonging to a Toyota, not a Dakota. Deputies DeLeon, and Grishom began an organized hunt with other deputies.
Precinct 3 Deputy Ray DeLeon tracked the vehicle to a trailer park on Reidland Road near Gum Gully. His investigation with park management indicated that someone had just arrived with boxes on top of her vehicle and had said she just returned from a trip to her mothers house with the items. They directed him to a certain trailer.
Deputy Jerry Grishom joined the hunt and saw with DeLeon that the suspect vehicle had hypodermic syringes inside as well as Century 21 labeled computer discs. Deputies Susy Griest and Vince Perry joined the scene.
When deputies knocked on the door, it opened and they immediately saw items obviously taken from the real estate office, including a rolling measurer, and computer equipment. Deputies obtained a consent to search.
During conversations with Griest and Perry, a male suspect was also taken into custody and conversation continued with the prime suspect including two discussions of methamphetamine. Officer Perry found about 310 grams of what tested positive for Methamphetamine.
HAZMAT and Harris County Sheriffs Narcotics Officers were called in when it became obvious there was more that a simple burglary involved. When the S.O.s office showed up they knew the suspects on a first name basis without introduction, according to Officer Perry. The authorities confirmed a small device to manufacture meth was found and sources say a suspect 600 grams of the controlled substance may have been in total being processed.
Sources say Michelle Betros had convictions in 1996, 1999, 2003, 2004, and 2006 including one federal charge. She was charged with felony theft and possession of a controlled substance with intent to distribute. The man was also charged with possession of the drugs.
Another arrest was made Monday on unrelated charges. Someone had to help her load the vehicle.
Don Cox stated, I think the Constables deputies deserve all the accolades they can get because in three hours they recovered our office, basically. The acted swiftly and knew what they were doing. Even Constable Jones came by to offer his help on his way to the parade.