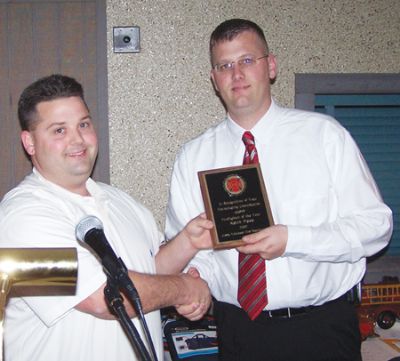 By LEWIS SPEARMAN
CROSBY  The bravado and dedication required to rush into a flaming building as everyone else is dashing to get out was subdued under the jovial countenance of local heroes last Jan. 26 at the Crosby VFD 2007 Appreciation Banquet.
Randy Foster announced that two five acre lots were purchased by ESD#80 for future fire station developments last year. One is located beside Station 2 in Newport, the other is located at the corner of Highway 90 and Kenning Rd. A new pumper has been ordered to replace the 1983 Grummond pumper to be delivered in August or September. An architect is currently designing the new station developments.
Last years was an extremely successful year for the acquisition of equipment in Crosby.
The Crosby VFD has been dedicated to lowering the ISO Rating for Crosby for years not only to improve the communitys safety but also to lower insurance costs for homeowners. This year the purchase of new Bronto aerial devise. The department not only received a new HAZMAT trailer to deal with dangerous chemicals. The ESD#80 bought a new utility truck to pull the trailer. Chief Alan Kulak announced the successes of Crosby VFD in raising scholarships. Booster #82 is being replaced by a newer model this year.
Bob Roberts of the Crosby VFD Fire Board announced that Briskets will be cooked at Crosby High School this Saturday from 11 to 5 the briskets will be sold for $40 each to benefit a local student.
Thanks to a grant chased after and received from the Texas Forestry Service four of five stations now are equipped with Jaws Of Life. Rescue Stokes and Rescue Randy has been bought to help train firemen in rescue training. Thirteen more sets of fire gear has been added to the department.
A new water rescue boat was taken this month.
Raymond Wilkinson was recognised in abstencia for 15 years of service, he had to work. Bob Roberts Sr. was recognised for 25 years of service and Randy Foster was recognised for 30 years of service.
Training Officer Chris Black presented an amusing and highly animated satire of mistakes made in 2007.