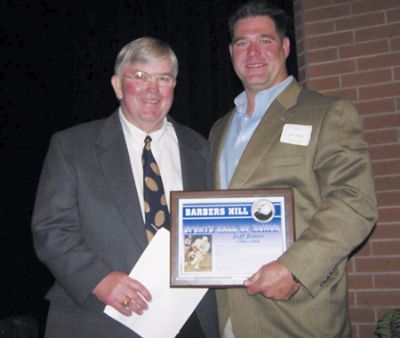 By BOBBY HORN JR.
HUFFMANHargrave High School football and track coach Jeff Jones is considered one of the most dominate football players of the 1990s within Barbers Hill ISD.
This past Saturday night his alma mater recognized him by inducting him into the Barbers Hill Sports Hall of Honor. Jones attended Barbers Hill High from 1990-1994. While at Barbers Hill he lettered in four sports: football, basketball, baseball and track. It was in football and basketball in which he most stood out.
Jones earned a spot on the varsity squad as a sophomore. Ken Skidmore, during Jones introduction Saturday night, said that he knew there was something special about Jones. Jones proved him right. In his first game on varsity on the very first time touched he touched the ball he scored a 94-yard touchdown.

The endzone would become a familiar place for this running back. He currently holds school records in most career touchdowns at 55 and he tied the school record with most TDs in a season with 23. He joked during his acceptance speech that if Skidmore had given him the ball one more time he would have broke the record, which has stood since 1971. He also holds school record for career rushing yards (1,556). Skidmore said that Jones had multiple 200+ games. Among the ones who stood out was the 1992 game against Liberty that Barbers Hill needed to win district. Jones had 289 yards on 39 carries. In 1994 he rushed for 238 yards in one game against Hargrave.
As a basketball player he was named District Newcomer of the Year in 1992 and Defensive Player of the Year in 1993.
Jones accepted the honor with humility saying that as he grew up in the Barbers Hill tradition he knew the names of the early legends.