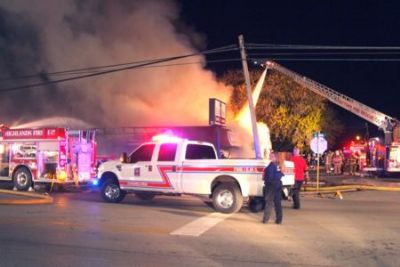 HIGHLANDS– Olde Cedar Inn was gutted by flames that began in the exhaust system near the northeast corner of that building on December 21.

Witnesses and firefighters say that Friday at about 6:47 p.m. a four alarm commercial fire call came in for the centrally located dining favorite on Main St. at College Street. The reports say a few flames in the kitchen was contained earlier that day. Later, a small amount of smoke emitted from the kitchen area into the back, eastern most, dining area. Minutes later customers and staff scrambled from the building as the entire restaurant filled with smoke in a matter of minutes. As many customers drove away from the fire, others had left their vehicle keys inside the restaurant. Kostaka Wrecker service was called in to tow two cars away, not only to save the vehicles from flames but also to clear the area for firefighters to have access.

By 7:10 flames went as high as 20 feet into the air while Highlands Volunteer Fire Dept. was joined by Baytown, Crosby, Channelview, Sheldon and LaPorte. Special crews from Harris County were on scene. Harris County Sheriff”s Deputies were joined by a Houston Police Dept. to contain traffic. Sheriff’s Deputies also controlled crowds to keep them at a safe distance.
The spewing flames rapidly spread throughout the nearly fifty year old structure. How firefighters were able to save as much of the structure as they did seemed miraculous even as flames near the northeast end were being finally extinguished at about 9:30 p.m.

Jerry Ikes of Baytown FIre Dept. was Fire Marshall on the scene and contained the area and contents for investigation.

A relative of the owner of the structure indicated an intent to rebuild the restaurant that has become a staple for local breakfasts and lunches and a reputation for the best Chicken Fried Steak.


Photos in print and internet courtesy of Portraits of Texas/Alan Hanagriff, and Star-Courier Photos by Lewis Spearman.