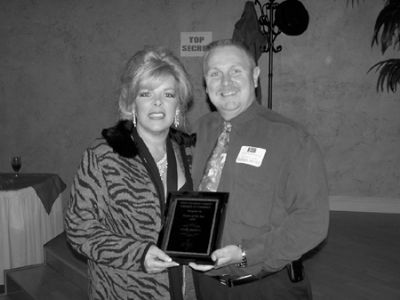 By BOBBY HORN JR.
BAYTOWN– She is a local business owner and active member of the community and now Holly Jackson is the West Chambers County Chamber of Commerce Person of the Year.
Jackson, who not only owns the Liquor Hut south of Mont Belvieu, but holds another full time job, was recognized Tuesday night at the chambers annual awards banquet.
Throughout 2007 Jackson showed a willingness to do whatever was needed to help the chamber succeed in its mission to serve the community. In addition to taking leadership roles in nearly every project, she was one of the co-chairs of the Diva Evening. A first of its kind for the chamber, this fundraiser brought in over $15,000.
Jackson was not the only one honored Tuesday night. The lifeblood of the chamber is its business support. Local businesses not only provide financial support but personnel and expertise for its projects.

This years Small Business of the Year is Bookwork Solutions and owner Michelle Gilmore. Turner Industries, represented by Joey McWilliams, was named Corporate Business of the Year.
Each year the three municipalities that are within the chambers service area: Mont Belvieu, Beach City and Old River Winfree, present a Volunteer of the Year award.
The years Beach City Volunteer of the Year is Patrick Patty Mac McDonald. A medic and volunteer firefighter for the past 17 years, he has served the Beach City VFD, Cove EMS and Trinity Bay EMS.
Simple Simons Pizza owner Dennis Demura was recognized for his community service with the Old River- Winfree Volunteer of the Year award.
McWilliams was honored by the City of Mont Belvieu as their Volunteer of the Year. Mayor Nick Dixon said that McWilliams expertise had been an invaluable asset to the Planning & Zoning Committee.
In keeping with the Spy theme, keynote speaker for the banquet was Professor Jim Olson. Olson served over 30 years with the CIA.