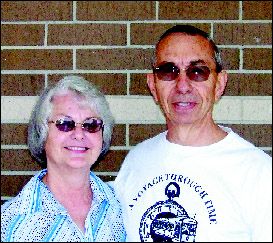 HIGHLANDS Jim Strouhal is one of the key people that makes this town a great place to live. Since he came here to work at the main packaging plant in 1964, he has been involved in most every aspect of the community.
Now, he feels at 63 years of age that he and his wife should slow down and enjoy life a bit more. He has retired from his work after 43 years on Feb. 15th.
Ed Davis, president and CEO of ZXP Technologies, said that the company will host a farewell party this Thursday, Feb. 28 at St. Judes Church, from 4 to 7 p.m. Everyone in the community of Highlands is invited, to express their thanks to Jim and his wife Letha.
Jim is known in Highlands for many community activities. He is vice president of the Chamber of Commerce, co-founder of the Highlands Heritage Museum and Preservation Project, member of the North Channel Local Emergency Planning Committee, board member of the Fire Departments Emergency Service District #14, and an active member of St. Judes church. He also operates Jimmie Strouhal Insurance Agency, which represents RVOS Farm Mutual Insurance and others. Letha is an active participant in this business, as financial secretary of the local lodge.
Other activities have included managing the Jamboree parade each year, and participating in the Harlem Elementary schools STAR program, a reading program where adults sit with students and read to them each week. Jimm says this has been extremely satisfying.

The Strouhals have lived in Highlands since their marriage in 1966. They met when they both worked at the Decker Drive-In Theater in 1962. They have four boys and six grandchildren, all whom live in the area. Jim is originally from Huffman, and went to Goose Creek schools, including Highlands elementary and Lee High School. Letha is from Cleveland, Texas and later Baytown.
In 1992 the city of Baytown named a day Letha and Jimmie Strouhal Day, in honor of the work they have done as R.S. Sterling Band parents and other community activities. Even today, Jimmie is the announcer voice at the teams halftime events.
Jimmies career in Highlands started with a phone call in 1964 from Paschal James, plant superintendent at SMS Industries, which had been the food canning plant in Highlands since about 1929. Over the years it had processed rice, vegetables, and figs. It started as the Tyrell & Garth canning plant, and was the main reason for the community of Helena, which became Highlands.
The work at the plant was evolving from food processing to automotive products, and Jim had some chemistry training to help in the lab. Over the years, he would work there under different owners and names, such as SMS Industries, Hi-Port Industries, Hi-Port, RhinoPak, and ZXP Technologies. He would hold positions as lab technician, lab manager, quality assurance manager, production supervisor, bulk materials manager, and manager of lab and environmental programs.
He said, Serving in these roles, I have had the extreme pleasure to interface with some of the greatest people in the packaging industrythose in our facility and those representing the businesses that we have dealt with.
In Jims early years, the plant focused on packaging food products, including national brands such as Hawaiian Punch, Dole fruit drinks, Sport Ade, QuickKick, Aunt Nellies, Cotton Maid Starch, Kitchen Kraft Blackeyed Peas, Top Kick Pet Foods, and General Foods Cycle Pet Foods. Each product line in the plant had its own separate building area, segregated from all the other areas.
As the plant brought on automotive products, such as antifreeze and motor oils, the food products were phased out to allow focus on contract packaging. ZXP is now one of the largest contract packagers in the country. Much of the countrys anti-freeze is packaged here.
Jim said that work at the plant required years of early morning starts, at 5:30 each day. He is not sure he will be able to adjust to a more normal schedule. He and Letha plan to keep busy with the insurance business and their community service activities.