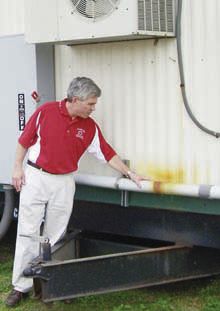 By LEWIS SPEARMAN
CROSBY  On March 10 the Board of Trustees for Crosby ISD passed a proposal for a school bond election for $103.5 million in upgrades to local schools with just under half that amount going to build a new 6th, 7th and 8th grade Middle School behind Barrett Primary on FM 1942.
The Board voted unanimously to hold the bond election.
A Long Range Planning Committee, made up of 25 community members, visited every campus and talked with all administrators over the past 5 months. The committee made their recommendations to the board the week of March 6.
In 1998 Crosby passed a $23 million bond and in 2003 another bond passed that totaled almost $46 million. The bond election in May is for $103.5 million. With the increase in construction costs, the new proposed middle school is almost $47 million, which is more than the total package in 2003.

According to Superintendent Michael Joseph, the referendum will address several critical needs of the district  student population growth, safety and security of our students and staff, technology equipment and upgrades, building for key programs, and big ticket maintenance items.
Crosby ISD has been growing at 3  4% a year for the past six years. Several of its campuses are close to capacity.
The proposal includes adding eight new classrooms to Crosby Kindergarten, building a new 6th through 8th grade middle school behind Barrett Primary, and moving the 9th grade to Crosby Middle School. Crosby High School would then be able to accommodate the 10  12 grade students comfortably for the next 10 years.
The bond calls for replacing several of the districts aging buses, providing for replacement of 16 regular buses and five special needs buses.
Expanding the parking lot at Barrett Primary to get all pick-up traffic off 1942 is a safety need. The bond calls for protective canopies for students during inclement weather, electronic security entrances, and new fire alarm systems.
A technology center that will house the tech staff, servers, and network backbone will be constructed. The bond provides for new equipment, programs, and replacement computers for students.
The installation of a video distribution network throughout the entire district will make it possible for teachers to share ideas, strategies, and curriculum. It will also provide teachers with access to many innovative lessons and experiences for students.
The bond also addresses two programs that need more space and improved facilities. The JROTC program, which is currently operating out of two portables, will have their own building complete with classrooms and a range. This election also calls for a Boys/Girls Athletic Training Facility, which will include dressing rooms for boys and girls sports, and a weight room that will have enough space for our students to train in a safe environment.
The total Bond Package would result in an increase of 20 cents. On a home valued at $100,000, that would translate into an increase of $16.67 per month. Homeowners who are 65 years of age or older, and who have been granted an over 65 tax freeze, will not have any increase in their tax rate as a result of the bond.