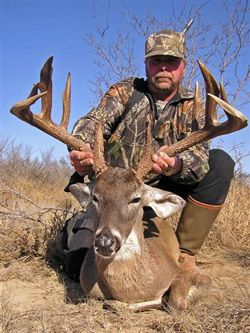 By LEWIS SPEARMAN
CARRIZOS SPRINGS  A Highlands man brought down a 40 inches mass, 183 and 3/8 points on the Boone & Crockett Scale, 8.5 years old whitetail buck on February 24 at the San Pedro Land And Ranch.
Keith Coble, owner of Highlands Tractor Kawasaki, attributes taking his quarry to breaking his usual hunting routine. Coble indicates that a hunter is supposed to pattern a deer but figures this deer was patterning him.
Coble has about 40 mounts that measure up to 179 Boone & Crockett Points and has become a steady enthusiast over the last 5 years.
Generally, Coble would drive his Mule somewhat near the field where the enormous male deer was once seen about three weeks prior grazing on the 42,000 acre ranch. Coble had been showing up at about 5:00 a.m., as the other hunters had done, for the first three days in the hunt.
On the last day of his four day hunting safari he parked his vehicle a full 1/4 mile further away and was in the field a full hour earlier. He crept to the field in full stealth mode and watched the deer frolic and graze under a nearly full moon. Coble managed to manouver until the wind came from his right instead of from behind him toward the deer.
When the enourmous buck entered the field all the other males scurried away and began to walk in the direction of Coble. The buck came to within two hundred yards from Coble before he fired striking the deer perfectly in the neck not only breaking the neck but also tearing through the heart.
The San Padro Land And Ranch only allows hunters to take deer over the age of seven and a half years old. the average age of bucks harvested in Texas is 5 years old. It is field hunting, not protein feed or high fence range.