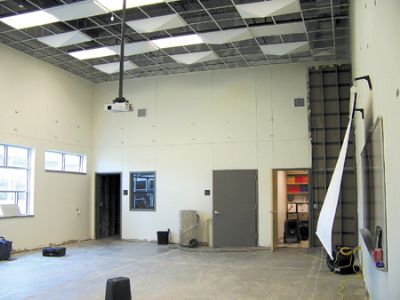 By LEWIS SPEARMAN
HIGHLANDS  Local students have been attending the new Highlands Junior High School building for only a week when a fire was apparently set in the Choir Room last Saturday, March 29 at about 11:30 p.m.
According to Harvey Little, Chief of Highlands Volunteer Fire Dept., first responders to the incident, After about 15 minutes from when the fire was set the sprinkler system went off and slowed the fires progress. The smoke alarm was not working correctly, so we did not get an alarm until the sprinkler system went off. I can say that the sprinkler system probably saved the building. We went in and checked for hot spots and did our overhaul. Had it not been for the sprinkler system there would have been a lot more damage. I was very proud of the way our fire department handled the situation. They found the problem and blocked off the sprinklers after we were sure the fire was out. There was a lot of water damage but it could have been a whole lot worse. adding, I want to especially thank Channelview, Crosby, Sheldon and Mont Belvieu for their mutual aide assistance with the save of the school.

James Bolton of the Harris County Fire Marshals Office reports that fire were intentionally set to cause damage to the school. It was further determined through interviews of school staff that there was money earned during a fund-raiser in the choir room of the school and this money appeared to be missing.
A fireman said We found a trash can that had obviously been set on fire and someone had piled stuff on top of a computer and set it on fire. Someone had broken out a window. 
Kathy Clausen of Goose Creek Consolidated Independent School District stated, We have been in there for a week and its very unfortunate. It is very disappointing, its very upsetting but Mr. Herring and his staff are doing the very best they can to enable school to go ahead as usual. Everyone is trying to make the best of the situation. We are really hoping that the individual or individuals that were involved will be caught. We are very saddened that it has happened but we commend Mr. Herring and his staff for taking care of the kids and making sure school goes on as usual.
The ceiling has been removed due to water damage, the baseboard were damaged while carpet, furniture and computers were completely lost.
There may be an arrest in this case because there are more security features at the new school than the perpetrator may have been aware. Although the Fire Marshals Office would only say that the fire is under investigation, surveillance tapes from cameras outside and inside the area are being reviewed.
Anyone with information related to the incident is asked to call Crimestoppers at (713) 222-TIPS.