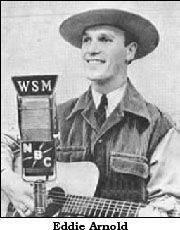 Been in the briar patch picking blackberries, got two large freezer bags full from two pickings. The Mrs. suggested blackberry jam out of the pickings but my thoughts are on another batch of wine.
Picked a few tomatoes out of the garden of weedin and some of the onions are ready already. Nothing better than a toasted BLT samich with homegrown tomatoes.
Dug up a few red potatoes but what little mess there is would not sustain a family over winter.
The bucket with two tomato plants growing out the bottom finally has a tomato on one of the vines. A far cry from the photos I have seen loaded with nice size tomatoes.
Sure did hate to hear of Eddy Arnold passing on, he was 89.

My mother truly enjoyed the music of Eddy Arnold on the old tube radio in our kitchen back in Georgia. Still have that old tube radio from back 50 years ago; Eddy Arnold, Hank Williams, and Ernie Ford were all popular back then. My mother would listen to the radio during the day when she was in the kitchen cooking biscuits or whatever; some of those old songs she could play along with a biscuit pan and right good at it.
Received news this past week of an old family friend who also passed away, at 93. Beulah Louise Irvin from Morristown, Tennessee.
She lived her life in my hometown of LaGrange, Georgia and her husband was a mechanic. He was also a racecar driver of ole number 1084. AJ were his initials but he was known as Jute. 1084 was the Lodge number of the BPOE.
Louise worked at the Cake Box off on one of the main streets in town back when I was a bicycle riding fool. After the picture show, I would go by the Cake Box and get a Coke in the bottle and a brownie. They had the best brownies you would ever want to eat.
The time on these events was when gas was in the price of cents if you savvy.
I would give Louise a case quarter and never paying any attention to the change, I would put it in my pocket and proceed to gnaw into those brownies and wash it down with a Coke and then a large belch of which I could do some CATTLE CALL.
Once I noticed the change and she said do not worry about it and I did not.
Being all this on a Saturday and the Cake Box closed on Sundays as did every other place in town.they also closed on Wednesday afternoons back then too.
Louise would give me whole cakes, which they would have to throw out or give to some of the help. Fortunately, for me, I have bicycled over a mile and a half, up hills enough to wear one out to get a German Chocolate cake to the house with one hand, thanks to Louise.
R I P Beulah and Eddy, two Tennessee folks.