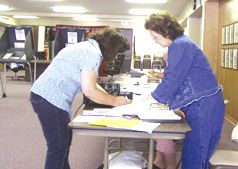 By LEWIS SPEARMAN
CROSBY  The Crosby ISD School Bond was voted down by 696 votes to 490 uncanvassed, according to Diane Fleming.
The Crosby ISD Superintendent Mike Joseph said, I take full responsibility for the bond not passing. Here is what I know about the Crosby community  it has great people that are supportive of the kids and I know that we are going to use this as an opportunity to come up with another plan that will be in the best interest of the entire community. I am possitive that something good will happen.
We are going to focus on what we do and that is providing quality education.
When asked if he believes that another bond will be proposed by next November he indicated that the general election would be too early.
We have to have time to bring in all fascets of the community to see what our plan B is.
When pressed concerning the costs of construction going up about 1% per month and the financial pressures of increasing gasoline and deisel.
I look at it as maybe next May maybe in the next two years, I dont know. The voters spoke and we appreciate that, we are going to look at the fact that there are people throughout this community that I am proud to know and develop another plan. It didnt work this time, so maybe there are some things that we can look at and maybe we can bring everyone together.
The Star-Courier had been sent a barrage of e-mails, somearriving after deadline. The proposed bond was to biuld a new 7th and 8th grade Middle School on Kennings Road. Much of the reaction to the proposal concerned increasing taxes in a time of economic uncertainty and uncertainty about the results of the up-coming general election.
Most of those that reacted to the proposal acknowledged that there is a need for new buildings in the district. The rate of growth in the district is now at about 2.5% per year when the decade prior to that has seen about 1% per year. Most of the growth had children in the Kindergarten age group.