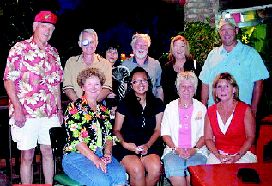 HIGHLANDS Ten months ago, an 18 year old exchange student from Taiwan came to Highlands as a Rotary Youth Exchange student. She was not sure what to expect in the U.S., but said in a recent interview that this trip had been a lifelong goal she wasnt expecting would ever come true.
But it did, and thanks to her home Rotary Club in Houli, and the Highlands Rotary Club, she learned about life in America by living with 3 host families and attending the 11th grade at Sterling High School in Baytown. Now she has prepared to return to college in Taiwan, but for the trip home, her sister Yu-Shan has joined her. They will spend a week in New York City, another dream come true, before the flight to Taiwan.
Lins three host families include Weston and Delene Cotten, Stephen and Linda Miller, and Andy and Patricia Scott. In addition, Gil and Mei-Ing Hoffman were counselors for the year.
Lin is the sixth exchange student that the Highlands club has hosted since they rejoined the international program a few years ago. Exchange students have come from Australia, South Africa, Argentina, Denmark, Germany, and Taiwan. Rotary president Charlie Ward extolled on the success of the program, and how all in the club have benefitted from learning about new cultures and people from this very close and personal experience.

An example of this might be Carols experience cooking a Taiwanese dish for her first host family, the Cottens. She cooked some seaweed that she brought with her, a delicacy in Taiwan but not something you normally eat in Highlands. The Cottens did there best to appreciate it, and as Weston said later, it was a great experience and Carol turned out to be the best exchange student yet for the club.
In recalling her year, Carol said that she was appreciative of the three host families and all they did for her. Even though they had different life styles, she learned new things from each one. She said the Cottens spent a lot of time with school activities, which she could participate in. They also took her to Disney World and Florida, a bonus for an exchange student.
The Millers were fun, and liked to travel to Houston and other places. In fact they took Carol with them on a vacation to California.
The Scotts, she said, were more country and peaceful and would go to a deer lease or local trip.
But the best part, she said, was that every family gave her an experience she wouldnt have had otherwise, to share with her.
Carol also kept busy with Rotary District events, such as a conference held in Tulsa, Oklahoma with about 200 Youth Exchange Students from around the world, which she got to meet and know. She got to speak at this conference, about her home in Taiwan, but when she used her new English words yall and cool the assemblage knew she was from Texas. She said she also enjoyed the District Conference held in Galveston, where she got to spend time with the 20 exchange students that Houston District 5890 sponsored this year, and dress up as in a Hawaian laua.
In her Highlands activities, she participated with club members in many events, including the Christmas bell-ringing, the benefit Washer tournament, collecting books for African countries, and distributing food baskets at Thanksgiving and Christmas Holidays. As she said, Highlands Rotary is really friendly and they are really doing things for the community.
While at Sterling, Carol participated in many classes and the tennis team. She was voted the most improved player by the coach and teammates… probably because she had never played before!
After a year, she is perhaps a little homesick. Her brother will graduate from college as a policeman as soon as she and her sister get back. Carol plans to start college, as a philosophy and marketing major.
Asked to characterize her home city in the U.S., she said it was smaller than she had hoped, and that it was difficult to get around without the help of others with cars. She thought that Americans put a higher value on living a happy life, while in Taiwan the normal lifestyle is one of working hard.
Her memories include the prevalence of central air conditioning, and how good soft chocolate chip cookies taste.
But of her Highlands year, she says time is too short. I will miss everyone and the things I didnt get to do.
At a going away luncheon this Tuesday at Rotary, she said I am just a small person in the world. Without you all I could never do this. It has been Amazing.