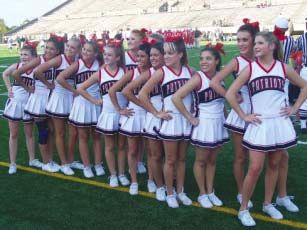 BAYTOWN  The Goose Creek Memorial Patriots first varsity game did not go as hoped for players and coaches as they lost to the Pasadena Eagles 27-20.

After falling behind early in the game, the Pats fought back to take a 20-19 lead in the third quarter. In the fourth they gave up an 8-point play to lose the lead. Memorial had one more shot to win the game late as they lined up on a first and goal with less than a minute to play. The Patriots fumbled the ball, which Pasadena recovered to seal the win.

In the Eagles opening drive of the game they used their larger size to push the ball down the field on a series of running plays. Juan Merino capped the drive with a six-yard run. The Patriots blocked the extra point attempt to keep the game 6-0.

On the first drive in school history the Patriots were unable to sustain their offense and were forced to punt.

After playing a game of field position the rest of the first quarter, the Eagles pushed back down the field to the one-yard line. Damon Ojeda forced his way through for a touchdown. On the extra point attempt the Patriots showed poise again, stopping a two-point conversion attempt.

On their next possession the Patriots gave their fans something to yell about.

Unable to find an open receiver Patriots quarterback Cody Larson tucked the ball in, slipped around the left side and ran 80 yards for a touchdown. The score became the first in school history. Price Jacobs added the extra point kick to make it a 12-7 game. Larson led his team with 94 yards rushing.

Pasadena extended their lead to 19-7 later in the quarter when Merino scored his second touchdown of the night on an eight-yard run.

With the last seconds ticking off the clock for the first half the Patriots defense came up with a big play of their own. Keithen Collins picked off an Ojeda pass and carried it back 88 yards for a touchdown. Again it was Jacobs with the PAT. At halftime the Eagles led 19-14.

The Patriots took their first lead of the night with 20 seconds left in the third quarter when De Martie Allen scored on a two-yard run. A failed two-point conversion left the score 20-19.

Merino would burn the Patriots one more with just over three minutes left in the game on an eight-yard run. Ojeda ran the ball in two complete the eight-point play.

Despite their troubles with turnovers (three), the Patriots defense did show some promise. In addition to the interception the team forced two fumbles, both of which they recovered. The team was especially good against the pass. The patriots help the Eagles Ojeda to 3 of 12 passes on the night.

Memorial will play their first road game Friday against Pearland Dawson at The Rig.