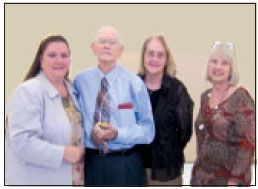 HIGHLANDS  The Highlands-Lynchburg Chamber held their annual Awards Luncheon on Thursday, Sept. 11, just before the Hurricane came into town.

These presitious awards are for service to the community, and include firefighters, law enforcement officers, business/organization, and the most important, the Terry Davis Award, which remembers the person whose name on the award is synonymous with selfless dedication and commitment to the community betterment.

The Terry Davis Award this year went to James Brazzil, the 91 year old retired co-publisher and founder of the Highlands Star newspaper, and through his work with the newspaper, Rotary, church and writing helped to shape the town into one of the finest places to live in Texas.

In spite of the impending hurricane, the luncheon at the San Jacinto Community Center was well attended, with lunch served by Four Corners BBQ. History of the Terry Davis Award

It is presented by the Chamber each year, to the person who exhibits the great qualities of an examplary model for us all. Like Terry Davis, someone who is always there to help with whatever project is at hand, someone who has helped with Fundraisers, benefits, and can be called an outstanding community service person. One that has helped Highlands become what it is today.

Terry Davis was a well known Highlander and prominent businessman who was one of the founding members of the Highlands Chamber of Commerce, and chaired the first fundraiser, which was the Carson and Barnes Circus. He was very active in the community, serving as a volunteer deputy for the Sheriffs department, and volunteer fireman for Highlands VFD. He helped the clean-up efforts around the community from Hurricane Alicia. He died on Sept. 3, 1983 due to burns he sustained while burning storm debris at his home.

Jessica Woods also announced that the 52nd Annual Highlands Jamboree would be held on Saturday, Oct. 4. Events to be included in the Jamboree are a Walk/Run and Bike Ride, for the benefit of the United Way Campaign; the Parade at 10 am; a Childrens Pageant for any age up to 5th grade; and Jamboree events at the Highlands Elementary School from 11am to 4pm.

These will include Kids Games, Crafts Booths, Food, Karaoke, and a Silent and Live Auction, benefitting the Chamber. The Cub Scouts Troop 107 will be present serving BBQ.