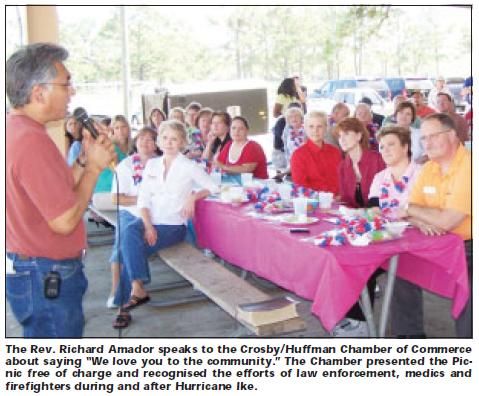 CROSBY – The annual picnic in the park fielded a growing spirit of community, October 2 when a lawman, two school superintendents and three preachers outlined hopes and strengths for the Crosby/Huffman Chamber of Commerce.

Bob Ward, lead cook, opened the informal ceremonies pointing out the donation of meat patties and funding for the event came from Arlans Market. Constable Ken Jones donated the tea and spoke first.

Calling Ike, The toughest hurricane to hit the Houston area, Jones reminded attendees of the important things we have to be thankful for, mainly our lives. He called attention to four deputies in attendance as they each are just coming off of 10 to 15 hour shifts for better than 2 weeks.

Jones annual fund-raiser has been postponed until March, not his campaign he joked. He spoke of area wide neighbors helping neighbors. Jones sees as preparation for future disasters that efforts be made to get the Mom & Pop business back up as soon as possible.

Reverend Richard Amador pointed to the power of individual efforts combined with others and advised the Chamber to unite and demonstrate that we love you, community.

This was a time when people were saying, I want to hear a prayer. It was God saying look at me again. said Amador, adding, In the middle of a hurricane we serve an unshakable God in a shakable world.

Reverend Keenan Smith of Crosby Church spoke of his churchs efforts related to the storm. He pointed to the courtesy shown before and just after the storm. Smith points to the faithfulness of individuals as being the reason we were able to survive this and how often the qualities of faithfulness are forsaken in the hustle of busy life. He pointed to the return of stability to our areas, not normalcy as that is a long way off for some. He encourages each of us to be a neighbor to all those around us.

Mike Joseph summed up the three preachers by saying, Hurricane Ike took away our electricity; but it did not take away our power. It could not because the power comes not through the lines but the power rests with everyone here.

Dr. Shirley Ellisor spoke next for the Holy Trinity Episcopal School, This is my third time to move back to Crosby and I am so proud, driving down the street I saw people helping people.

She announced a golf tournament to raise funds for the school for which she works. Best prize for a hole in one is a Titan truck, Titan is their mascot.

Next luncheon is to be held at the First Baptist Church on October 16 at 11:30 a.m. The Honorable Ted Poe, R., 2nd U.S. Congressional District, will be speaker.