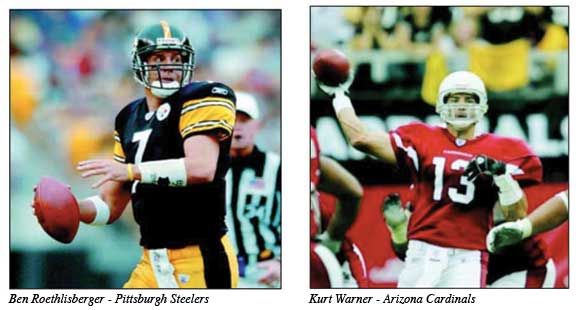 One team has been there numerous times before, while another is making its first trip to the climactic game of the NFL season.

When the 2008 NFL season began, many believed the Pittsburgh Steelers had a legitimate shot at playing for a sixth Super Bowl title, but few gave the Arizona Cardinals a chance to be playing for their first. But thats todays NFL, just when you think you have things figured out, crazy things happen.

Prior to the start of the season, most so-called experts believed the Dallas Cowboys would stroll into Tampa Bays Raymond James Stadium to take on San Diego, New England or some other capable team from the AFC.

But a funny things happened on the way to the big dance, the Cowboys collapsed, and as for the AFC contenders, the Chargers made a remarkable run to end the season to qualify for the playoffs, where their season ended in the second round of the playoffs to the Steelers, while the Patriots were on the inside looking out in the AFC playoffs.

But thats history and this column is to discuss the two teams who are left and who yours truly thinks will win on Sunday in Tampa Bay.

Both teams carry a lot of momentum into this game, especially the Cardinals who were left for dead after suffering a 47-7 trouncing at New England in Week 16. Head coach Ken Whisenhunts team picked itself up and won their finale against Seattle and then won three straight playoff games in impressive fashion thanks to a rejuvenated Kurt Warner. They dominated Atlanta at home in the Wild Card round, then ran roughshod over the Carolina Panthers at Carolina in the divisional round before rallying for a 32-25 victory over Philadelphia in the NFC title game.

The Steelers, on the other hand, had an easy time of it with San Diego (35-24) in the divisional round before earning a hard-fought, 23-14 win over Baltimore in a hard-hitting and bruising AFC title matchup.

Its a good thing the Steelers had two weeks to recover from that one! But things wont get any easier against an Arizona team that will bring a swagger and confidence, along with the games hottest wide receiver, into Sundays Super Bowl.

Many will expect the Steelers to ease to victory, but not so fast! Arizona has a hot quarterback in the 37-year-old Warner and the games best wide receiver in Larry Fitzgerald. That duo has connected for five touchdowns in three playoff games and add to the fact that the Cards have also rediscovered their running game thanks to Edgrin James and his fresh legs, the Pittsburgh defense now has a lot with which to contend.

Things could be made all the more difficult if fellow wide receiver Anquin Boldin has gotten over his pouting after being replaced late in the NFC title game. FOXs cameras captured Boldin and offensive coordinator Todd Haley engaged in a heated exchange when Boldin was removed late in the Philly game. Boldin did not help his cause by quickly exiting the Arizona locker room after the game as he passed on celebrating the franchises biggest win to date with his teammates. Arizona fans have to hope Boldin has grown up some in the last two weeks, and is poised to contribute against the Steelers on Sunday.

While the Cardinals are playing solid offense, their defense has also stepped up its game in the post season. The run defense has been outstanding and defensive coordinator Clancy Pendgrast has shown hes not afraid to bring pressure via the blitz during the playoffs.

The Steelers are well aware of all of this and know they must get running back Willie Parker untracked early to force Arizona to respect the run and open up the field for quarterback Ben Roethlisberger. Big Ben has performed adequately in the playoffs and his ability to move around in the pocket should benefit the Steelers come Sunday. In the Baltimore win, his ability to withstand the pass rush allowed him to hook up with wide receiver Santonio Holmes on a 65-yard touchdown pass that provided Pittsburgh with some much-needed breathing room against the hard-hitting Ravens.

Speaking of Holmes, he has turned into a solid weapon in the playoffs for the Steelers. He returned a punt for a touchdown against San Diego and has come up with some clutch receptions during post-season play. He may need to step up his game again on Sunday if the dependable Hines Ward is slowed by the knee injury he sustained in the Baltimore game. Ward is the heart and soul of the Steelers, and it might take a broken leg to keep him out of this game. Expect No. 86 to be ready to go come sundown on Sunday. Remember, he was the MVP four years ago when the Steelers won their fifth title against Seattle in Detroit.

Also look for tight end Heath Miller to have a significant role in the passing game on Sunday.

Defensively, the Cardinals will be facing the NFLs best defense and you had better believe James Harrison and mates will bring the pressure early and often to the 37-year-old Warner. Look for them to attack Warner early to gum up his timing with his talented receiving corps.

As stated earlier, this should be a better game than most expect. The Cardinals arent going to lie down for the Steelers. Theyve invested too much in the last month to quit now, but then again, the Steelers know history beckons and theyve been here before and recently as well.

In the end, Big Ben makes the plays down the stretch and the Pittsburgh defense does its part as the Rooney family takes home its sixth Lombardi Trophy, making it the first NFL franchise to accomplish that feat. Sorry Dallas and San Francisco fans, but deal with it!