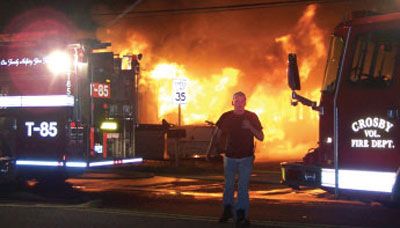 A Bay Area Construction Company office was a double wide trailer on Main St. near Blue Bell and Riverside, at 1:58 a.m. on Feb. 8 fire departments from Crosby, Highlands, Mont Belvieu, and Channelview were dispatched to combat a growing flame there.

The local volunteer fire departments gathered troops and resources (a task in the wee hours) and within minutes had men on the scene trying to tap into a fire hydrant that was unexpectedly dry. Crosby’s Tanker 85 truck that made the scene first and the Highlands crews assembled to apply manpower.

“We had plenty of water to fight the fire,” said Highlands Captain Daniel Grabill, indicating there were two tankers from departments.

“The water utility here has always informed us of dry hydrant before.” said Chief Harvey Little when asked about why fire crews didn’t know of the dry hydrant. Conditions have been ripe for a disastrous fire given wind drying and lack of rainfall for the year, locally.

By 2:27 a.m., although firemen attacked aggressively, the task was to protect surrounding property as flames jet from every window and the structure was wilting. Explosions could be heard from the rear of the building as tanks on that end of the structure became involved. The trailers behind the office began to blaze then and efforts were concentrated on stopping the flames as a relentless wind coursed from the South.

Crews boldly brought hoses between the fire source and the new target structures spraying directly into the hottest sources and hosing down new starting flames.

Each crew cooperated with one another to keep flames retarded as water sources were switched. Crews fought to hold the line on spreading flames.

The battle proved the necessity of mutual aid policies established in Northeast Harris County. The building was totally consumed and two nearby trailers were damaged to a slightly lesser degree.

Harris County Sheriff’s Deputies controlled and redirected a substantial amount of traffic (given the early morning hour) around the fire located just North of Highlands’ downtown area. There were about twenty pedestrian spectators to the flames.

Harris County Arson Investigators were attending the scene the following day and are said to be launching an investigation into what caused the fire. Apparently no one was injured in the fire.