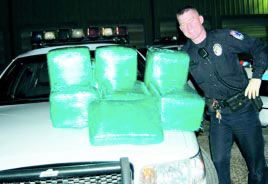 BAYTOWN — On the evening of Jan. 26, a minor traffic violation by a Houston man led Baytown Police Officer Zach Jolly to a large marijuana seizure.

According to Baytown Police, at approximately 11:50 a.m., Jolly was parked on the side of the roadway in the 4100 block of I-10 East, monitoring traffic and checking drivers speed with radar.

Jolly observed a silver Chevrolet Impala with Mississippi license plates pass him. The vehicle did not have a light that illuminated the rear license plate which is a requirement under Texas law.

Jolly pulled the vehicle over and contacted the driver, an unemployed Houston man identified as John Wesley Aaron Jr, 53.

Aaron could not provide proof of insurance before giving consent to search his vehicle. Upon searching Aarons vehicle, Jolly located approximately 100 pounds of marijuana in the trunk. Aaron was arrested and charged with Felony Possession of Marijuana. His bond is set at $200,000.

Aaron was later interviewed by Baytown Police Detectives and admitted his plan to transport the marijuana out of state for distribution.