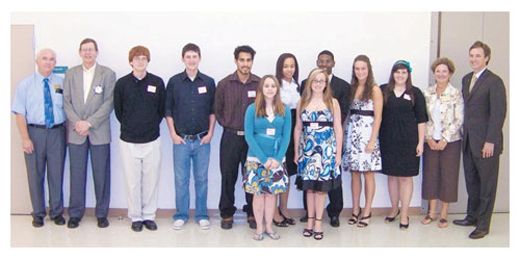 HIGHLANDS  Each year, a committee of Rotarians reviews scholarship applications, and based on grades, needs, and essays, awards a number of scholarships from the proceeds of the Rotary Chili Feast, and other fund raising events of the club. This year, eight scholarships of $1500, and four scholarships of $2000, were awarded to twelve deserving students, for a total of $20,000 toward their college education.

The awards were made at a Scholarship Banquet, held last Monday night at the San Jacinto Community Center in Highlands. The featured speaker for the evening was Past District Governor of Rotary District 5890 in the years 2007-2008. Tallas is familiar with Highlands, having visited the club many times and presenting it awards for outstanding service.

The speaker each year usually tries to give the scholarship recipients some advice on their upcoming college experience, and some motivational thoughts and how to deal with the future.

Tallas complimented the twelve on their accomplishments, stating I want my kids to grow up to be just like you. He referred to the way they have achieved balance and success in their lives. He gave them some guidelines for their future life: the three Fs of Faith, Family, and Friends. He explained how these principles could be used throughout life to give meaning, enrich experiences, and help give solace and meaning to their future.

Tallas also encouraged them to investigate Rotary opportunities in their future, such as Rotaract in college, or ambassadorial scholarships to pay for a year of study abroad. Committee chair Dr. Larry White welcomed the 12 recipients, who were picked from a field of 39 candidates.

Pat McPhee Scholarship, presented by Barbara McPhee to Taylor Self; and

Each student who was present was asked to tell a little about themselves, and then what their plans were for their future.

In addition, guests, parents and Rotarians were asked to share their thoughts on the importance of the evening and the meaning of the scholarships. Students spoke of their college choices and future careers: engineering, geology, pulmonology, marketing, international business, nursing, neurosurgeon, charity work, an awe inspiring list for the audience.

Rotarians asked Where did you get your inspiration? and What one person has influenced your life? Answers evoked much discussion and participation, and this final thought from Dr. White, We give these scholarships to invest in our leaders of the future. You all have so much potential.