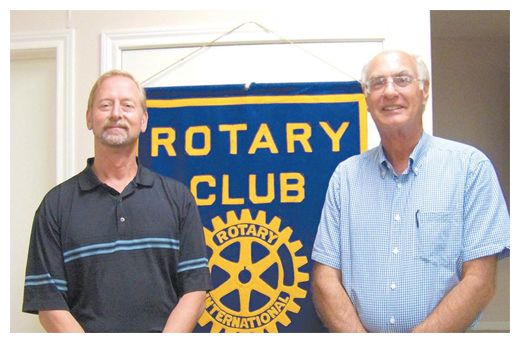 HIGHLANDS  Chinquapin School, the private educational institution on Wallisville Road that helps educate economically disadvantaged inner city kids that want to get to college, will get a new Director this summer. The Board of Trustees announced that after an extensive search, they had hired Dr. Charles (Ray) Griffin to be the new Director, effective July 1. Griffin follows Bill and Kathy Heinzerling, who have been at the school since 1978. Heinzerling was named the Director in 1983, following after the founders, Bob and Maxine Moore.

Highlands Rotary Club was the venue for the introduction of Griffin to the community, and saying goodbye and thanks to Heinzerling. This was appropriate, since the club helped welcome Chinquapin to Highlands in 1973, and has maintained a supportive relationship since then, with Rotarians such as Jay Bird and Joe Hausberger and Johnny Gaeke involved in the InterAct Club, and other Rotary related events.

Heinzerling had indicated to the trustees several years ago that he needed a change, to get new energy into his life. He and Kathy originally planned to head for Colorado and new non-teaching careers, but the economy has tempered those plans, and they will now reestablish in Houston, he said.

Heinzerling has seen the school grow in his 32 years there, from 16 boys in a facility at Umbrella Point east of Baytown, to now more than 150 students on 56 acres in Highlands. Once only boys, now there are more girls than boys attending, and the classes have grown to include 6th through 12th grades.

Students who apply to attend, must plan on going on to college, and must be accepted by a 4 year college prior to receiving their high school diploma. 85% of them go on to finish and graduate from college. Some have returned to teach as a thank you to Chinquapin.

Heinzerling has seen the budget grow from $50,000 the first year, to over $1,800,000 now. There are now over 17 faculty teaching, and the graduating class has grown from 6 the first year, to 18 to 19 in current years. Griffin has been the head of an an inner-city charter school in Denver, prior to coming to Chinquapin. He chose to come here because he believes in the values established by Bob Moore.

Griffin sees a national problem in education, and thinks private schools such as Chinquapin could set an example which would help solve the crisis. He sees the pilot model as setting an example where students are challenged, and expected to work hard and long to achieve their goals, helped by dedicated teachers.

Griffin comes from a family where his father was a Rotarian and Paul Harris fellow, who started a private school in Washington State with similar goals as Chinquapin. Other models Griffin cited were free private schools such as Hershey or one in Hawaii.

Griffin said that Bob Moores ideas, such as love for each other, would overcome some of the educational problems. He saw the schools mixed ethnicity as a good social and learning environment, part of the pilot model he foresees for Chinquapin.