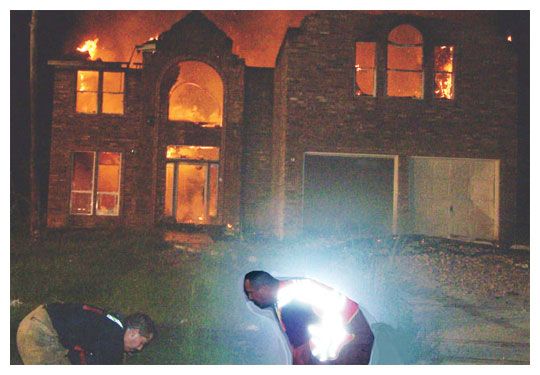 NEWPORT  Firemen from Highlands and Crosby rushed to put out a blaze at an uncompleted house in Newport, Tuesday morning at about 5:30 a.m. Fire crews tried for better that 40 minutes to knock out the flames, but the building was just about totally involved even before the crews arrived at the scene.

While under construction a lack of water supply was the reason that the house could not be completed. The Maldenado development saw four houses built before it was discovered that Newport Municipal Utility District was unable to provide water/sewer facilities under the conditions at that time. The development had already been approved by the N.P.O.A.N. and was just shy of being connected, before funds were exhausted, sources say.

Delay after delay held the project up for six months, including telephone pole specifications that went unresolved, say other sources.

Since the developer filed for bankruptcy, vandalism in multiple instances has attacked the unoccupied houses. Until the fire Tuesday morning burned the largest house, only barricade fences separated the previously wooded area from the rest of Newport that is lit by street lights.

Fire Chief Alan Kulak was on the scene and expressed worry that the shell of the building might be a hazard, long after the fire was finally tapped out. He expressed multiple concerns for the neighborhood, especially not knowing the cause of this fire.

Once it was determined that hosing down the fully engaged building was unproductive, then fire fighting went into defensive mode as crews cleared away debris and flammable materials and watched for sparks. The house would have to burn itself out and crews would be on hand for hours to see that the fire did not reignite or spread. There would be only taxpayers to bill for this fire, since it was in a bankrupt section.