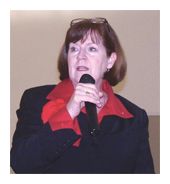 HIGHLANDS  The membership luncheon last Thursday featured Democratic Candidates and a speaker for Americans For Prosperity at odds. Among the wonderful activities that the Chamber is involved in with schools and libraries a lively discussion of issues ensued.

The State Director of the Texas Chapter of Americans For Prosperity seemed to speak item for item from the Rush Limbaughs talking points that day as Diane Trautman, Democratic Candidate for Harris County Tax Assessor and retiring Justice of the Peace Tony Polumbo listened politely for their chance to cross examine.

American for Prosperity she stated generally believe that government has taxed, spent and regulated us to much.

What we are trying to do is simply empower taxpayers as citizens so they can be more productive and proactive on issues they care about. said Venable.

She stated that American For Prosperity is a nonpartisan organization that cannot support candidates, has a 501C3 status and is also a 501C4 so they can support or defeat legislation.

The issue that brought the most debate was global warming; fact or conjured hoax.

Their website is listed as www.LoneStarStrong.com. A flier indicates Texas is first in Transparency, Law Suit Reform, No State Income Tax, Top Exporting State, Top State For Business, Most Fortune 500 Companies and Fastest Growing State in the Country.