Primary Election Results 2010 — Runoffs to be held for J.P. and State Rep. races 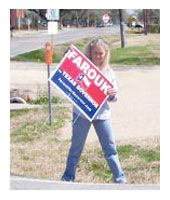 EAST HARRIS COUNTY  The 2010 Party Primaries may well be remembered at the Vote Before the Vote with run-off elections planned on both the Democratic and Republican sides.

Justice of the Peace Tony Polumbos (Harris County Pct. 3, Place 2) decision to retire had created a four-horse race to be the next Democrat to take the bench.

Denise Graves and Don Coffey will face in the runoff, gaining 24 and 46% of the votes respectively.

Former Houston Mayor Bill White will continue his run for governor, picking up 90% of the voter. The closest competitor was haircare mogul Farouk Shami, who got 7%.

There was a trio of Democrats who want to be the next lieutenant governor of Texas.

Ronnie Earl, who just missed the mark with 46%, will face Linda Chavez Thompson in a runoff. Restaurateur Mark placed third.

Leading the ballot for county races is that of county judge. Gordan Quan had no trouble with Ahmad Hassan, winning with 83% of the votes.

Roy Morales avoided a runoff election among Republicans in U.S. District 29. He picked up 58% of the votes beating Tom Stevens, Frank Mazz Mazzapica, Eric Storey and George A. Young.

There has been heavy campaigning for the State House District 127 seat, being vacated by Joe Crabb.

Dr. Sue Curling and Dan Huberty were the top vote-getters with 20% and 48% respectively, forcing a runoff.

Also getting votes was Addie Wiseman and Martin Basaldua.

The winner will face Joe Montemayor in November.

The race for Texas Governor has also gotten a lot of attention.

Rick Perry knocked out challenger Kay Bailey Hutchinson with 60% of the votes.

GOP voters had their say on five non-binding referendums ranging from social to economic issues. Democrats had chosen to have no referendums on the ballot.

Referendum 1 calls for legislation that would require a photo ID for all elections in Texas.

Referendum 4 states that the use of the word God, prayers and the 10 Commandments should be allowed at public gatherings, public education institutions as well as permitted on government buildings and property.

Early voting for the runoffs will be April 5 to April 9. The election day is April 13.