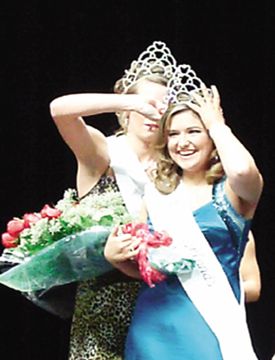 The contestants were judged on smile, poise and wave.
Taking stage as master of ceremonies for both pageants this year was Sterling White Funeral Home and Cemeterys Managing Partner Jeff Moore. Assisting him was 2009 Miss Highlands Courtney Spann.
In both pageants, contestants are judged in categories of sportswear presentation, evening gown/ party dress and interview. There is also an optional talent competition.
In addition to the top three finishers in each pageant, special awards are given for Congeniality, High Ticket Sales and Photogenic. Linsday Turner won the talent award for playing of a Bach tune on piano. Elizabeth Keyes won High Ticket Sales honors and was voted winner of the Congeniality Award. Holly Turner won the Photogenic Award. The family of Highlands Horizons founding member Jennie Robbins has created a special Community Service Award, which is given to the contestant who has gone out of her way to serve her community. This years honor went to Alli Little.
In the final voting for the crown, Keyes was named second runner-up and Shelby Russell was named first runner-up.
Earlier in the day the Junior Miss Highlands Pageant was held.
The format is nearly the same as the Miss Highlands, the main differences being a different question asked in the interview and party dresses replace the older contestants evening gowns.
Casie Russell won the Talent Award for her recitation of the Shel Silverstein poem Sick. She also won the Photogenic Award Reznicek won High Ticket Sales. Lyndsey West won Congeniality In the final voting for the crown, Casie Russell was named second runner-up and West was named first runner-up.