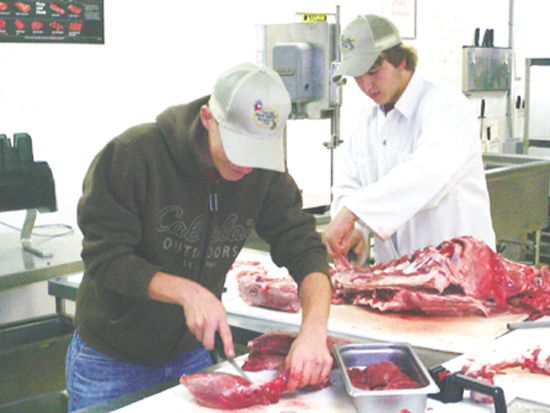 By BOBBY HORN JR.
MONT BELVIEUKnives, bone saws and electric meat tenderizers may not be the typical items found in a classroom, but for students in Barbers Hill FFAs Meat Processing class they are the tools of the trade.
Mary Wilson, FFA instructor, said the school began the program seven years ago because she saw a way to prepare students for jobs after graduation. There is a huge industry out there for meat processing, especially on the college level, she said.
Wilson said that once a student completes the class they would have the skills to work in any butcher shop or grocers meat market. Not only will this give them job skills, but also it can lead to a career she added.
Wilson noted that one former student who went through the program later attended Texas A&M university, where she earned a degree in Meat Science. That former student is now in charge of making all meat purchases for Houston Independent School District.
Starting next semester, students enrolled in the class will earn dual credits through Central Texas College.
Barbers Hill is nearly unique in offering the class. Wilson said that there are only five such programs offered in Texas.
The meat processing class is offered in two parts. The first part is an introductory class, where students learn sanitation, industry standards, health department regulations and safety. They then go onto the actual processing, where they have classes in animal anatomy and the standard cuts of meat.
Student Heather Caudle said she is taking the class to learn the skills and giver herself job options.
Since Barbers Hill does not have a kill floor meat arrives in boxes, as it typical in butcher shops. The meat that comes in is the ones usually found on meat counters such as brisket, poultry, pork and lamb. Students also learn to make boudain as well as smoked sausage.
The fall, however, means deer. Area residents can bring in deer and have the students process it for a fee of $125, quite a bit less than professional butchers. Wilson said that in the past couple of weeks 17 deer have been brought in for processing.
Cody Griffin, a student is the class, brought in two deer that he killed this season. They will be a class project for him. He said that hunting takes on more significance for him when he is able to see the product go from the field to freezer.