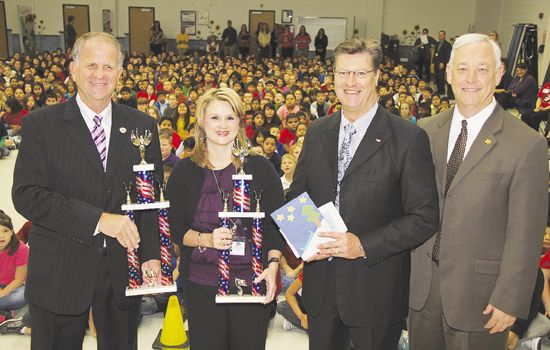 HIGHLANDS The program is called Christmas cards for our Troops. Its mission: to put smiles on the faces of as many of our U.S. troops from Texas as possible.
And no school in the 2nd U.S. Congressional District accomplished that mission better than Goose Creek CISDs Highlands Elementary School.
On Nov. 29, Congressman Ted Poe presented the student body and faculty of Highlands Elementary School with two trophies  one for 2009, the other for 2010  for the most Christmas cards and for the Most Creative Cards for our troops.

The response to this project has been overwhelming, said Poe. I would like to give a special thanks to all those that took time to remember our troops and recognize their sacrifices this Christmas.
Poe singled out three Highlands Elementary School teachers behind the schools Christmas card drive: music teacher Donna Johnson, art teacher Sandra Marquez, and computer literacy teacher DAnn Gonzalez.
Each hand-decorated Christmas cards included a note from the teacher, and a CD of Christmas music sung by Highlands Elementary students.
I want to thank all those who made this year special for our troops  it means the world to them, Poe said. Its a job well done.
For the past four years, Congressman Poe has been collecting Christmas cards to distribute to U.S. servicemen and women who are serving our country in Iraq and Afghanistan.
Poe said no school district in his district sends more Christmas cards than Goose Creek CISD.
This school district has been very, very energetic in producing these Christmas cards, Poe said.
Poe said he got more than 10,000 cards from Goose Creek CISD.
Goose Creek CISD board member Bob Hoskins, whose son served in Iraq and Afghanistan, told the Highlands Elementary students that letters from home are very important to the troops, and they cherish the words on the cards.
They really appreciate the support, he said.
Principal Ruth Perrin told the students and staff, I am so proud of you, holding both trophies high.