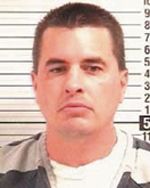 By BOBBY HORN JR.
DAYTONThe man believed responsible for the April 5 robbery of the Security State Bank in Dayton was arrested in Florida last week.
Police arrested David Glenn Manuel , 38, at a condo in Panama City, Fl. on April 27. Manuels arrest followed another bank robbery in Florida.
Manuel is charged with the robbery of Bay Credit Union in Panama City on April 15. He also faces a federal violation of probation. Deputies found drugs in Manuels condominium and additional charges of Possession of a Controlled Substance (Cocaine and Oxycodone), and Possession of Drug Paraphernalia, as well as a hold for the United States Marshal Service has been placed on him.
Police said they attempted to capture Manuel the day before, but he evaded them by diving into the Gulf of Mexico. A tip then led them to the condo, where they apprehended him at 1:30 in the morning when he returned. As officers approached the condominium, Manuel was seen jumping off the balcony of one of the units and running away down the beach.
Police believe that the Bay Credit Union robbery was one in a string of robberies dating back to April 5.
Dayton police have identified Manuel as the man who entered the Security State Bank in Dayton on April 5. The robber passed a note to a cashier saying he had a firearm and demanding cash. No one was injured in the incident.
Shortly before the robbery the Dayton High School received a call saying that there was a bomb at the school. No such device was found. Police traced the call back to a payphone near the bank. They believe the call was made to divert police resources away from the area.
On April 25 a man identified as Manuel entered the Citi Bank off the 18400 block of Interstate 45 in Shenandoah and allegedly handed a teller a note stating he had a gun and wanted cash in large bills given to him. He was given an undisclosed amount of cash before fleeing.
No one was injured during the robbery, but police determined he was also was the same man who allegedly had robbed the Compass Bank in Porter earlier in the day. Police also said that Manuel attempted to purchase a used car in Conroe immediately following the robbery and that he offered to pay cash.
As of press time, Manuel was being held in a Panama City jail while authorities decided whether to pursue state or federal charges against him and in which state would the charges be filed.