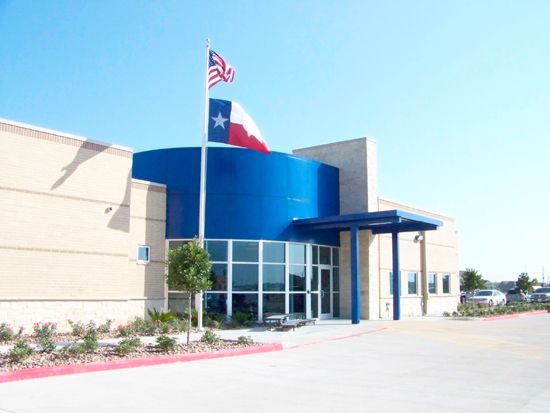 MONT BELVIEU This community gained an extensive new facility for the health of its citizens, when the Chambers Health organization held its Grand Opening on Tuesday of the new clinic building on Eagle Drive.
Present for the ceremony were officials from the Hospital District #1, and Chambers Community Health Centers, Inc. as well as the public and medical staff of the clinic.
Also present were Chambers County, city and federal officials that helped bring the project to fruition. After recent hurricanes, federal officials including Senator John Cornyn helped secure the funding for the building, under the Social Services Block Grant program and a special program for areas impacted by devastation from past and future hurricanes. The building will serve as a shelter and a medical facility during severe weather conditions in the future.
At the ribbon cutting ceremony, remarks were made by CEO Bob Pascasio, Public Hospital District Vice-chair Marian Whitley, Mont Belvieu mayor Nick Dixon, Community Health Center Chair Jack Waldrop, and Hospital Distric Chair Tommy Willcox. In addition, representing Senator Cornyn, Jay Guerrero read a letter wishing the endeavor success and support.
The building is a FQHC, or Federally Qualified Health Center primary care provider, delivering a variety of services including family and industrial medicine programs and services. These include pediatric programs including immunizations, womens health care, geriatric services, adult medicine, employment and school physicals, occupational health services, minor surgical procedures such as laceration repairs, cyst and wart removals, etc., wellness programs and services, patient counseling and education, and inhouse routine lab services and diagnostic imaging, including x-rays, and CT scans.
Tours of the building after the ribbon cutting revealed exam and treatment rooms, a nursing station, doctors offices (three full-time on staff at this time), labs, radiology including a CT scanner with digital files, business offices and break rooms, surgery and recovery rooms, and even a play room for children. The building layout suggested that expansion would be possible at a future time, also.
The public is encouraged to come to see the new facility, and make use of the modern health care services available. Staff speaks Spanish as well as English, and can be reached at 281-576-0670 for an appointment.