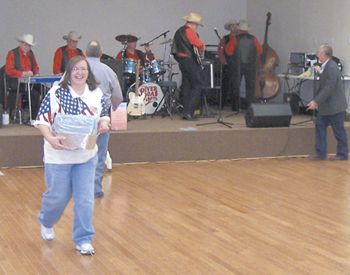 CROSBY  When American Legion David H. McNerney Post hosted the Crosby Stomp last Saturday night the band played the traditional Texas Swing and the strings were tight and the music smooth for a little tight dancing.

Many of us were able to visit with friends that we had not seen in many years. The parking lot held about 220 vehicles and the dance hall was brimming.

A Live and Silent Auction was held and a drawing for door prizes.

According to Mrs. Guillory the Ladies Auxillary believes that the Stomp (a tradition of street dancing in Crosby dating back to the 19th Century) is revived. Plans are now to host the event every two or three months, probably every two.

The River Road boys played all the favorites and the capacity crowd did the rest.

Admittance was $10 per person or $15 per couple. No word yet when the next dance will be held but there are plans being made.

The American Legion put together the attraction and gathered donations for the events features. Keep reading for further developments.