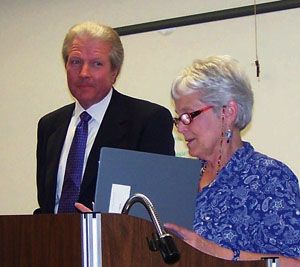 CROSBY  Justice of the Peace in Precinct 3 Position 2 Don Coffee spoke to the Friends of the Crosby Library about the role of the library in modern times and got into explaining what he does for a living.

After a single question he lead into the problems facing todays youths and problems with the schools and judicial systems in their efforts to handle those problems.

Coffee will not be hearing the case of 5 Crosby youths that are facing a class 2 felony for Criminal mischief but is familiar with the conditions and the questions of how to administer justice when youths are involved.

All this came on Monday when the names and charges against five area youths were released that had flattened the tires on 58 buses with bolt snips.

Wednesday and Thursday are the juvenile cases, said Coffee, I have kids with $11,000 in fines from the schools. They usually dont pay those fines. On their 17th birthday, the county issues a warrant for their arrest. I have 5,300 warrants for arrest on kids that got tickets in the sixth grade. They cant get a drivers license, but dont think they are not driving. When I came in to office I tried to make a change to make this system less punitive. Because the system isnt working. If it was working, I would not have changed anything. I am not being critical of the system, I am trying to do differently.

When a child comes before me I give them 60 days probation. They can not have unexcused absences and can not have any citations, and they owe me $100 court costs right then. So, I let them work that court cost off in community service and we have a list of community service opportunities. One of those involve tutoring, they return to the school and say the judge has ordered me to do tutoring.

My first goal is to improve their reading levels because reading is elemental to everything. Coffee explained.

In 1993 they adopted the 0 tolerance ruling and you started getting 10 and 11 year old with fines and charges. In Crosby one of the more frequent charges is dipping snuff. Fighting and assault of course have to be handled seriously.

Those five kids that thought it was going to be a cute stunt to cut the valve stems off those buses are facing state jail felony charges and one has seemingly lost a scholarship. Kids make bad choices, it is one of the things that marks being kids. The system in place called zero tolerance seems to dictate that if they make a bad decision their life is ruined. It isnt our fault there is zero tolerance. But ours is a court of equity, we do not keep transcripts my decision is what we follow so I have some space to rule, if they dont like my ruling they can appeal but they will start all over again. he explained.

So if someone begins life with a second degree felony does it correct them or does it, ruin their life as Coffee stated?

I think their will be some common sense applied at some point, I think right now we are at the shock and awe stage where we are trying to scare some sense of how serious the act was to others. I think it will be bigger than a Class C and they will probably face Criminal Mischief with a record and they will be put on probation and maybe that one kid will not lose his scholarship. But right now it is a dollars and sense thing. I think the cost was about $1900 for the tires and other costs I am not aware of now. But we all know that when we are kids some pretty egregious things happen but no one went to jail. Nobodys lives were ruined but truly we have gotten into this mode of zero tolerance. There were all kinds of reasons for it but I think that at some point we have to rethink extreme enforcement. stated Coffee.

What is really important is making sure these kids get though High School. I got me a man that understands these kids, has won awards, he had to take a $2 an hour cut to come to my court and he loves it. We get that family help and treat the whole family.

On Sept. 1 with the help of Senator John Whitmire we established legislation that each school have a truancy prevention program asking why students are absent. Coffee stated.