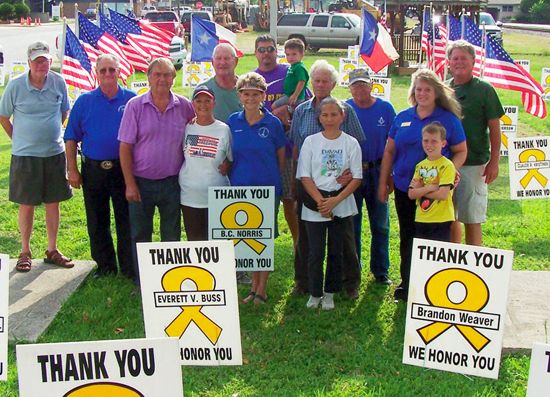 HIGHLANDS  The Memorial Day Service at Sterling White Cemetery last Monday was solemn, filled to capacity and chocked with a sense of values of patriotism that almost define this community, Crosby and Huffman.

As the Boy Scouts brought in the U.S. Flag before it was raised in ceremony a procession included the Memorial Wreath and a Color Guard of Honor. With them were trumpet player Dana Read and Pipe Major Tom OBrien of Texas Bagpipes.

Jeff Moore, Managing Partner of Sterling White Funeral Home and Cemetery spoke an opening and pointed out recently interred veterans of the War on Terror as a reminder that the sacrifice was on-going for freedom.

Pastor Jerry Hovater of the Little Country Church in New Caney dedicated the services with prayer.

Guest Speaker Col. Frank Bertone has certainly paid his dues having served in the U.S. Army and in law enforcement for Precinct 3 Constables Office. A Master Peace Officer, he served 8 years in the U.S. Air Force, 17 years in the Texas State Guard, serving as Battalion Commander, Brigade Commander, Deputy Chief of Staff, graduated Sam Houston State University, Texas State Guard Officers Academy, U.S. Marine Corps Command and Staff College, ICMA Training Institute for Local Government and Police Management and the Southern Police Institute for Criminal Justice Studies, to mention a few of his educative backgrounds. Now he is serving as Texas State Chairman Awards Committee for the Department of Defense, Vice President of Texas State Guards Trust Fund, Vice Chairman of the Texas Military Forces Support Foundation, Past Grand Knights Council of the Knights of Columbus #3229, Grand Officer of the Solemn Military Order of The Temple of Jerusalem, and member of the American Legion of Crosby.

His address defined the Memorial Day celebration as a day to give thanks to those that have fought for the things that we have. His address called the day for quite celebration not for politics, debates or causes.

Memorial Day is a day to say thank you to those that stand among us.

A special dedication was presented by Pastor Hovatar. A roll call of those veterans interred at Sterling White in the last year was performed by Don Guillory. As bagpipes played Amazing Grace a dove release was performed by Houston Dream Doves. Sampson Masonic Lodge #231 lead by Sgt. Rusty Mayfield placed sprigs of evergreen on the tank representing eternal life of the struggle for freedom.

After the ceremonies, Sterling White offered up fresh hot dogs and buns and all the fixings for a traditional Memorial Day lunch.

Jeff Moore said, The Staff of Sterling White Funeral Home and Cemetery gratefully acknowledges your presence and Thanks You for your continued trust and confidence. I would like to thank all of you for attending our Memorial Day Services. It is a great honor to serve you and your loved ones. I would also like to thank my staff for all of their hard work and dedication. A special thank you to all the local vendors who have contributed to this years services. Houston Dream Doves, Crosby High School JROTC, Boy Scout Troop #107, the Crosby American Legion Post 568, Crosby Ladies Auxiliary Post #9761, Botanical Designs, bugler Dana Read and Pipe Major Tom OBrien, Sampson Masonic Lodge #231 and with a very special thank you to Pastor Jerry Hovater and Col. Frank Bertone.