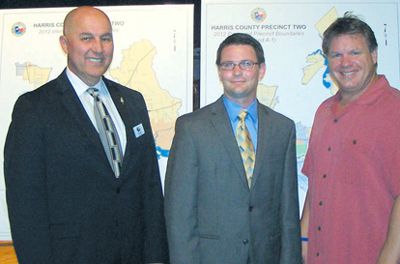 When Precinct 2 Commissioner Jack Morman came to town on May 10 it was with news of infrastructure plans to meet challenges to communities, the distinctive feature however was that Precinct 2 is in the design phase of making Crosby-Lynchburg into a four lane within Barrett Station.

The design indicates that there would be two lanes North and two lanes South from Magnolia Street South to the limits of the community.

Jack Rodriguez, Senior Director of Road-Bridge/CIP for Precinct 2, described the new roadway as not having enough room to become a boulevard between existing houses. The plans also include a new route for buses to travel to and from Drew Intermediate School. The Precinct is already in the purchase phase of the rights of way.

Now there are problems with widening the existing two lane into four lanes. First Precinct 2 cannot do it without the State of Texas highway agency, TXDoT, making a narrow strip that now leads from the Crosby Freeway Bridge to FM 1942 the same width as that proposed in Barrett Station.

Problems with that requirement are manifold. There are environmental challenges currently, there is a waterway under the extant bridge. That portion now has a turn lane onto FM 1942 from the North but is currently a bottleneck for Southbound traffic. The State retains all rights of way within a distance of bridges such as the one that goes over F.M. 2100 because the structure of the bridge must remain uncompromised by subsidence and encasement. In other words the engineers dont want the land shifting anymore than is out of control around bridges that have to carry enormous burdens. The second problem is more familiar to most of us it involves money.

Commissioner Jack Morman stated, I got an increased budget of three million dollars, that three million equates to exactly the operating budgets of all the facilities that we acquired. So, it does not take into account the amount of the additional right of way, or take care of the road maintenance. We will be able to vett all of those but not as fast as we would like. We are already stretching our dollars, we are just going to have to make our dollars go farther. It is nothing new for us living lean and doing more with less. Were trying, any partnership we can get, like with the State, we jump on that. It is not butting heads, it is collaboration and the States budget is worse than ours for having money to spend on needed projects.

If we can get some help out of them we would be ready to start moving. Morman stated when asked to confirm the need for TXDoT to help match the width of the proposed Main St. of Barrett Station.

In addition to widening Main Street, the Commissioner has gone to the Harris County Attorneys Office to ask if it would be possible for the county to front the money for M.U.D. 50 to handle infrastructure needs, pipes and other problems, and then pay Harris County back over time. It appears for now that this may, depending on a vote by Commissioners Court, be possible.