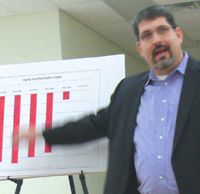 CROSBY  The local Superintendent of schools asked for a 23¢ per $100 valuation for a year in two possible phases at the Crosby-Huffman Chamber of Commerce Luncheon Jan. 17.

The forewords by Board Chairman Glenn Cole before Dr. Keith Moore made his presentation gave indications far past any projections of Dr. Moore. The Greater Houston area is to be the third largest metropolitan area when they take the next census. We will be surpassing Chicago. I was talking to the Executive President of Center Point Energy last week and he was telling me they are projecting six percent growth in this area over the next four to five years.

The setting for calling for the bond is based upon a Citizens Advisory Committee recommending that the school undertake needs for the best interests of the students. The longest most complicated understanding is that currently interest rates are at historic lows they could be locked in by the bond and currently construction costs are low but they are rising.

Dr. Moore was speaking of Crosby Independent School District Campuses have a capacity of 5,203 students. Current enrollment is 5,170 students. There is space for 33 additional students district wide. His main point was that if the Crosby ISD Board of Education calls for the bond at the February meeting that 23¢ per $100 valuation that one year would present funding for a new high school, with grades 6th through 8th then taking the current high school with modifications. The 4th grade elementary school would be the current middle school. An Agriculture Barn would be built. A new David H. McNerney JROTC building would be built. New tennis courts, a new athletic field house, a new technology center, a turn around auto stacking drive for Newport Elementary, and elementary playground updates would be included.

Next a Phase 2 would go effect only if the tax base grows enough so that the same 23¢ generates enough revenue to begin Phase Two. Phase Two would also be 23¢ more per $100 valuation one year. It would widen the seating capacity at the football stadium and add new baseball and softball complexes.

The bond would mean that a house evaluated at $107,245 fair market value would be evaluated at $92,245 after state exemptions and that property holder would have to pay $212.16 more per year or $17.68 more per month. That home represents the average in Crosby. A home at a quarter million dollars would become $235,000 after state exemptions and an increase of $540 per year or $45.04 more per month. These increases would yield $76.5 million as Tax Base or enrollment grows $9.98 M more.