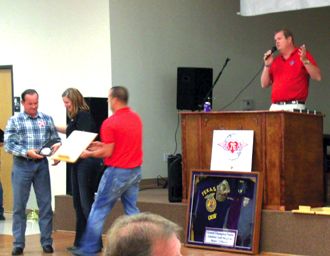 CROSBY  The social event of the year was the Cody Stephens Go Big or Go Home Memorial Dinner at the American Legion Hall on Saturday, Sept. 28 and raised funds for heart screenings for high school students throughout the state.

The event had as Master of Ceremonies Scott Stephens and featured a live and silent auction that was conducted by volunteers of the Crosby Fair & Rodeo, including Bill Busby as auctioneer.

According to Scott Stephens on the following day, We pretty much netted about $200,000 to put to heart screenings. We had about $95,000 in corporate sponsors, $78,000 in live auction then we had event tables, a raffle, Tee-shirt sale, silent auction and we had $15,000 in expenses. The guy for the American Legion Hall told me That is the biggest event, by far, that we have ever hosted and probably the biggest we will ever have, unless you do this again next year.

According to Stephens, the event raised enough to perform about 13,00000 heart screens but, he has bigger plans. We are going to approach some of the bigger heart health associations that really make a difference in Texas and get the dominos falling where the testing is just standard procedure, Scott told the Star-Courier.

Early, Don Vickers sang a song that Stephens and Larry Holder wrote entitled , Go Big or Go Home. It is on the Cody Stephens Memorial Website for those that wish to hear it.

Barrett Primary contributed to the cause, the six and seven year olds of the community got to wear silly hats and socks when they contributed a dollar. They raised $776.76 in total and sent Stephens a note saying, We know when our time comes we will get a heart screen also.

When Stephens told the audience the sentence from his son, Cody, that the Memorial Fund was named for a standing ovation from the packed house resonated the walls. Go Big or go home, also resonated in the hearts of the listeners.

During the event Scott Stephens told this assembly of the tragedy that lead to the initiative to screen for heart problems in students, In May 6, 2012, Cody Stephens was a few weeks from graduating from Crosby High School, and looking forward to showing his pig, steer and lamb at the Crosby Fair and Rodeo in June. He was also excited to be headed to Tarleton State University on a football scholarship, and working to stay in good physical condition to be prepared for college football practices.

At 69 and weighing 289 lbs, he seemed to be in perfect health, and had no idea that he had a fatal heart problem. On that Sunday afternoon, Cody came in, kicked back in his dads recliner, clicked the TV on, said he was tired and dozed off for a nap. He never woke up but died in his sleep, from Sudden Cardiac Arrest.

Most local elected officials were in attendance including both Precinct 3 Justices Parrott and Coffey, Constable Ken Jones, and Texas House Representative Wayne Smith, R. 128, District along with Sylvester Turner and got extra recognition for sponsoring House Bill 1319, the Codys Law.

Those new to this area were impressed too, says Mary DeBauche for the group of cardiologists that performed the screenings earlier, Cypress ECGproject.org to Stephens, We were blown away by the love and care shown by the Crosby community at Codys fund-raiser tonight. Your family is truly blessed to be surrounded by such caring and generous people. Now lets go spread the good works – screen em all!

Stephens says, If your school is not on this list, parents, perhaps you want to visit the Codysetphensmemorialfoundation. com website for more information.

Deer Park, are you reading?

In honor of Octobers National Sudden Cardiac Arrest (SCA) Awareness Month, Screen Across America, a coalition of organizations from around the country that provide youth heart screenings, launched a new website -www. screenacrossamerica.org – to draw attention to the prevalence (and locations) of heart screenings in the United States. SCA is the leading cause of death of student athletes. According to the American Pediatric Association, SCA kills 2,000 children a year in the United States.

The new website depicts a map of the United States. Forty-five organizations, both for-profit and nonprofit, that conduct at least two screenings per year, are identified by a virtual push-pin. When a user rolls over the pin, the name, city and website of each organization is provided.

Despite it being a vital organ, children in the United States do not receive a comprehensive heart screening. In most states, school districts require students to undergo eye exams, hearing screenings and scoliosis screenings. The common goal of the organizations participating in Screen Across America is to make heart screenings a standard of care for students.